...All right, I'll tell you. 'Cause I want to destroy everything. The people of this city. This city itself. The whole world!

Dyne is a non-player character in Final Fantasy VII. He was Barret Wallace's best friend, and they lived in Corel. Dyne is the biological father of Marlene.

Dyne has black hair, wears a white shirt, green trousers and an olive drab vest with red trim. He is muscular but shorter than Barret. Dyne's gun arm is longer but narrower than Barret's and only contains a single barrel. Notable aspects of Dyne's appearance include his gold chain and left gun arm.

In his youth, Dyne was wary of outsiders and loved his old way of life. He was initially protective of the coal miners. Later on, Dyne was devastated by a number of tragic events which took everything he loved away from him, making him bitter and a nihilistic defeatist.

When the Shinra Electric Power Company wanted to build a mako reactor near the town, Dyne originally opposed it. When there was an explosion at the reactor, Shinra took revenge on the town of Corel and burned it down, killing his wife, Eleanor, and Barret's wife, Myrna.

Dyne assumed Marlene, then a newborn, was killed, as well. When Barret and Dyne tried to escape from Shinra, the troops fired upon them, causing Dyne to trip and fall into a deep crevice, but Barret was able to grab hold of Dyne's arm, preventing his fall. On order from Scarlet, the Shinra soldiers fired again directly into the friends' arms, causing Dyne to fall, destroying his left and Barret's right hand in the process.

Thinking his friend was dead, Barret adopted Marlene. Dyne, like Barret, had his hand replaced by a machine gun. Dyne was thought to be dead, until Cloud and his friends discover people killed in the Gold Saucer. A survivor tells them they had been shot by a man with a machine gun for an arm, whom everyone, unaware of Dyne's existence, assume to be Barret.

Corel Prison and reunion with Barret[]

The party is accused of being the attackers and arrested. Without trial, they are summarily thrown into the Corel Prison. The party is told by Mr. Coates that they need the boss's (Dyne's) permission to get out of the prison. Barret meets up with Dyne, who, in grief over his family's death and the state of the world, states that he wants to destroy everything. To try and help ease his pain, Barret tells Dyne that Marlene is still alive.

While happy to hear this news, Dyne hints that he intends to kill Marlene to reunite her with Eleanor, thinking it will ease her loneliness in the afterlife. When Barret tries to reason with him, Dyne fights Barret. After Barret wins, Dyne claims that his hands are too stained with blood to ever have a right to hold Marlene again. He gives Barret Eleanor's pendant to give to Marlene. Dyne permits Cloud to enter a Chocobo race for their freedom, before committing suicide by jumping off a nearby cliff.

Dyne appears in the novella Hoshi o Meguru Otome. Since his death, Dyne has become tormented by the memories of his actions, and his gun-arm symbolically appears soaked in blood because of it. With Aerith's assistance Dyne is able to come to admit he wanted the world to be destroyed when he was alive, and is eventually able to free himself from his torment and find solace. As a reward for this, the Lifestream accepts him and he is greeted by a vision of his wife as he dissolves.

Dyne is fought during the events of Corel Prison in a one-on-one battle against Barret. He fights mainly using physical abilities and despite having access to Fire he never uses it. Dyne is vulnerable to Poison-elemental damage.

Dyne appeared as a boss in Final Fantasy VII G-Bike. His Limit Break was S Mine.

Included with the International Version's special fourth disc is a large collection of various background items seen during the course of the game. Dyne's pendant is one such item that can be viewed.

According to the Final Fantasy VII Ultimania Omega[1], Marlene was originally going to be Barret's daughter rather than Dyne's. Dyne originally wanted to fight Barret because he still had someone in this world, while Dyne was left with no one. Dyne had many proposed names in the early drafts, such as Duel, and Vicks.

The field model for Dyne's pendant. 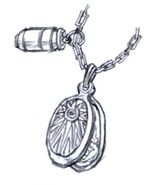 [view · edit · purge]Dyne is the unit of force in physics specified in the centimeter-gram-second system of units. It is defined as "the force required to accelerate a mass of one gram at a rate of one centimeter per second squared". The word ultimately comes from Greek dynamis, meaning "power" or "force".