Is it not I? I, who have dirtied my hands to keep yours clean? All that you are you owe to me! You ought be on your knees thanking me, yet here you stand in judgment!

Dycedarg Beoulve is an antagonist in Final Fantasy Tactics. He is the older brother of main protagonist Ramza Beoulve. Both a skilled magician and fencer, Dycedarg earned the title of Rune Knight. He seeks to elevate House Beoulve no matter the cost to gain power and enrich himself.

Dycedarg has a short auburn hair styled in a fringe on front with the edge split into two sides. He has brown eyes and a full beard. He wears black and gray robe with white spiral designs on his sleeves and golden folded sleeves with white linings. Underneath he wears a golden turtleneck, a red and yellow lined side belt to his waist, and brown boots. He has a white fuku collar and wears red gloves. In his in-game sprite the color of his robe is blue gray and the sleeves are white. During Chapter 1, after he suffers injury, he wears a dark green robe with a dark peach collared shirt.

Dycedarg initially appears as a rational, calm, and collected strategist. However, he is revealed to be an uncaring individual who only strives for his personal ambitions. He is an archetypal Machiavellian, driven by his desires to accomplish his goals through any means necessary. In doing so, he dishonors the House Beoulve family name and shows no remorse for his actions.

Dycedarg is Bestrald Larg's childhood friend. Unlike his brother and father, the role he played in the Fifty Years' War between Ivalice and the eastern nation of Ordalia is unclear. His confirming his father Barbaneth's successful suit to Ordalia's Lennard suggests he may have been involved in handling diplomatic relations.

Following his father's death, Dycedarg was poised to become the leader of the Order of the Northern Sky, but ceded the position to his younger brother, Zalbaag. He was installed as an adviser to Larg, now Duke of Gallione.

Unbeknownst to any save—seemingly—for Larg himself, Dycedarg had orchestrated Barbaneth's death by progressively poisoning him with the toxic mushroom known as mossfungus to secure the position of head of House Beoulve. His plan was from there to leverage himself into a position near enough to Larg to have the opportunity to kill him and bring the Beoulves to power over all of Ivalice.

Role in the destruction of the Corpse Brigade[]

Dycedarg is one of many nobles hoping to destroy the Corpse Brigade, a revolutionary organization led by Wiegraf Folles comprised of disenfranchised peasant soldiers who were denied their pay at the end of the Fifty Years' War. Behind the scenes Dycedarg solicits Wiegraf's second-in-command, Gustav Margriff, to kidnap Marquis Messam Elmdore of Limberry, as he and Larg are uncertain of Elmdore's loyalties in the coming succession conflict, and wish to remove him as a potential threat. Dycedarg orders his younger half-brother Ramza, a Limberrian Squire named Argath, and Ramza's best friend Delita, to guard Eagrose castle, possibly hoping to avoid their entanglement with the Corpse Brigade and his schemes.

Zalbaag is unaware of Dycedarg's machinations, and is confused the Brigade would suddenly undertake a kidnapping, given that this is out of keeping with their prior tactics. Working at cross purposes to Dycedarg, he subtly suggests that Ramza, Delita and Argath investigate the affair, noting that "guarding a castle grows dreadfully dull..." Spurred on by Argath, whom he and Delita rescued from the Corpse Brigade on the Mandalia Plains, Ramza sets out to rescue Elmdore. Following clues from a Brigade captain captured in the Merchant City of Dorter, they trace Gustav and Elmdore to a basement underneath the ruins of a desert settlement, the Sand Rat Sietch. They find Wiegraf and Gustav dueling, and watch the former kill the latter. Wiegraf releases Elmdore to them, claiming that kidnapping is beneath the Brigade.

Back at Eagrose, Dycedarg chastises Ramza for disobeying his orders. Larg enters and rallies to his defense, noting that he and Dycedarg themselves were once impetuous youths. Once the three squires take their leave, Larg mentions that even though their plans for the kidnapping were thwarted, Elmdore's rescue might still prove advantageous, as it positions him as owing a debt of gratitude to Gallione.

Nigh simultaneously with Ramza's eradication of Corpse Brigade forces at the Brigands' Den, a brigand known as Gragoroth Levigne leads a group to storm Eagrose to assassinate Dycedarg. While the unit kills five Northern Sky knights, seriously wounds Dycedarg, and absconds with Delita's younger sister, Tietra, Zalbaag intervenes before they carry off Alma, the youngest member of House Beoulve. Dycedarg collapses from his injuries and later explains to Ramza that he has ordered Zalbaag to hunt down the remaining brigands. He assures that the Northern Sky will wait until Tietra is safely recovered, claiming that she is like a sister to him. However, Zalbaag later allows Argath to shoot Tietra during a standoff against Gragoroth at the battle of Ziekden Fortress.

Outbreak of the War of the Lions[]

One year later, Dycedarg hires a Fell Knight named Goffard Gaffgarion to kidnap Princess Ovelia and blame it on the Order of the Southern Sky, the rival knight-force to the Northern Sky, thus providing a casus belli for the latter to declare war and put Prince Orinus—supposed son of the king—on the throne. This would put Dycedarg and Larg as the powers behind the new monarchy, as Larg, Prince Orinus's uncle, would be appointed regent.

Ramza has absconded House Beoulve and cast aside his family name in shame of Dycedarg's actions during the battle of Ziekden Fortress. Dycedarg tells Gaffgarion to kill Ramza if he gets in the way. During the kidnapping of the princess, Agrias Oaks, a Holy Knight in charge of defending Ovelia, berates Lezalas, the leader of the troop trying to perform the actual kidnapping, and the plot ends in disaster. Duke Goltanna, leader of the duchy of Zeltennia on the Ordallian border, had in his service the kidnapper himself, Ramza's boyhood friend Delita, who takes Ovelia back to him. Shortly thereafter, King Ondoria dies of the Black Death.

Goltanna marches the Order of the Southern Sky on the kingdom's capital, the Royal City of Lesalia, and declares her queen. Larg enthrones Prince Orinus in opposition, and marches on Lesalia himself with the Order of the Northern Sky, resulting in the battle of Lesalia Plain. Goltanna loses control of the city and retreats to Zeltennia.

Delita, endearing himself to Goltanna by ratting out a treacherous minister in his council, recommended the Southern Sky march and captured Queen Louveria at Lesalia, and imprisoned her in the impregnable bastion of Fort Besselat. The Northern Sky under Zalbaag marches on Besselat to liberate the queen (an ally of Duke Larg, her brother) and disrupt the Southern Sky enough to claim victory.

Both armies are debilitated when the disgraced engineer, Barich Fendsor, sprays of mossfungus poison over the battlefield. High atop a sentry tower overlooking the battles, Zalbaag comes across Dycedarg stabbing Larg with a small dagger. Dycedarg instructs Zalbaag to place it in the hand of a dead Northern Sky knight to make it look like the latter was a Southern Sky spy. Larg, hacking up blood, lashes out at Dycedarg for being a patricidal traitor. Passing out from the toxin, Dycedarg never gives an explanation, much to the chagrin of the thunderstruck Zalbaag.

Recovering from the mossfungus poisoning, Dycedarg meets the Church of Glabados's envoy, a mysterious templar knight named Loffrey Wodring, to negotiate with the Northern Sky. Zalbaag overhears Loffrey refer to Dycedarg's talent with using poison, pointing out Barbaneth died with symptoms similar to mossfungus poisoning. Dycedarg sits in uncomfortable silence as Loffrey offers him the Capricorn auracite, a legendary artifact, as proof of the church's good intentions.

Zalbaag visits his father's grave and finds mushrooms growing around it. After a local chemist identifies then as mossfungus, Zalbaag sets out to avenge both Larg and his father's deaths. Dycedarg, Capricorn Stone in hand and unaware of its supernatural powers, duels Zalbaag and Ramza. Zalbaag defeats him, but as Dycedarg is dying the Capricorn Stone takes him over, transforming him into the Lucavi demon Adrammelech. Adrammelech wipes out the Northern Sky knights who were defending Dycedarg, kills Zalbaag, and attacks Ramza. Ramza prevails, and with Adrammelech's destruction, Dycedarg also perishes.

Dycedarg is fought as a boss towards the end of the game in Eagrose Castle. He is a level 43 Rune Knight with 66 Bravery and 77 Faith, and comes equipped with the Defender, Aegis Shield, Circlet, Carabineer Mail, and Power Gauntlet. He has access to the Swordplay and Magicks commands, and can use Sticky Fingers, Defend, and Move +1 (due to his unique job class, he also has access to Defense Boost and Arcane Defense). He is vulnerable to the following negative statuses: Blind, Oil, Chicken, Slow, and Silence.

In the PlayStation version, his special job class is misspelled as "Lune Knight" during his fight with his brothers.

When fought in the fourteenth Rendezvous battle: Brave Story, Dycedarg is level 99 and starts with 68 Bravery and 66 Faith. He comes equipped with the Save the Queen, Crystal Helm, Circlet, Luminous Robe, and the Magick Ring. He comes with the Swordplay and Item commands, as well as the Arcane Strength, Regenerate, and Move+1. He is vulnerable to the same statuses as previously.

In Chapter 2, while speaking with Sir Goffard Gaffgarion, Dycedarg says, "Our little mockingbird is taken wing, Gaffgarion, and it leaves me wroth", foreshadowing his transformation into "Adrammelech the Wroth". When Dycedarg transforms, his zodiac sign changes from Scorpio to Capricorn.

Dicedarg appears as a card in the Ivalice Special Arena has a limited-time special arena with eighteen floors. 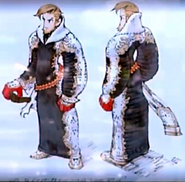