Cid Pollendina: Oh, shut up and help me remodel the Dwarves' Forge page!
Please expand this article into a full one. The following tasks need to be completed:This request can be discussed on the associated discussion page. Remove this notice upon completion.

"Lost in Dedication"
Dwarves' Forge is a location in Final Fantasy Brave Exvius. The forge is home to a large dwarven population, many of whow work in building airships alongside the humans of Industrial City Dilmagia.

A few hundred years ago, the Paladian engineer Cid arrived at Dilmagia while searching for the Wind Crystal. He got rid of many monsters blocking his path, which unbeknownst to him were preventing the local dwarves from mining ore. Three dwarves thanked Cid, claiming their forge was his forge. He accompanied them so as to find out about the land, but at the forge they repaired his cherised pocket watch. Cid noticed their intellectual curiosity and, as thanks for the pocket watch, decided to teach them how to make airships.

Nowadays, the dwarven artisans craft the parts for the humans' airships, many of which only dwarves know how to make.

Led by the airship engineer Lid, the party arrives at the forge. Lid greets a friend and tells him they have business in the Wind Shrine. The dwarf tells her she is out of luck as there are monsters blocking the path, trapping some of his good friends on the other side. Rain vows on his honor as a knight to free his friends. The dwarf tells him it is dangerous, but Lasswell tells the dwarf not to bother as Rain is not type to listen to common sense, or even comprehend it. Lid is surprised at their 'bad manners' but helps them out.

After they defeat the Liquid Flame, an agitated dwarf tells them that an armored bastard grabbed his comrades and disappeared. The man didn't introduce himself but muttered something about putting the dwarves to work in Ambel Village. The party thus hurries to the village right away, suspecting the man to one of the Sworn Six of Paladia.

Deal ice damage to an enemy

Defeat a liquid flame with a limit burst

The Knight of Hardship[]

This exploration appears as part of the side quest "A Knight of Grandshelt". 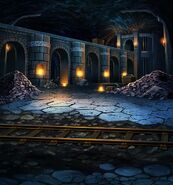