Axe that is a favorite of dwarves.

Dwarven Axe (ドワーフの斧, Dowōfu no Ono?), also known as Dwarf Axe and Dwarf, is a recurring axe in the series. It is generally one of the first axes in the game acquired, and is thus the weakest axe in most of the games it appears in.

The Dwarven Axe is the weakest axe, usable only by Cecil, Cid, and Kain. In the non-3D versions, it provides +62 Attack, 19 Accuracy, +5 Strength and Stamina, and -5 Agility, Spirit, and Intelligence. It can be found and bought for 15,000 gil at the Dwarven Castle. This weapon is metallic.

In the 3D versions, it instead provides +82 Attack, 95 Accuracy, +5 Strength and Stamina, and -2 Agility, Spirit, and Intellect.

In the Easy Type version, its attack power was increase to 70 and hit to 40%. It is also effective against Mages.

The Dwarven Axe is the only axe to appear. The axe can only be equipped by Cecil and Cid, the latter comes equip with it. It has an attack power of 62 and a accuracy of 19 with a bonus of +5 Strength & Stamina, -5 Agility, Spirit, & Intelligence. The axe is not a Dual Wield weapon, so Cecil and Cid can equip a shield while holding it.

The Dwarven Axe is a mid to high-ranked axe, providing 62 19% Accuracy, increases Stamina and Strength by +5, and decreases Speed, Intelligence, and Spirit by -5. It can be equipped by Cecil, Kain, Cid, Luca, Golbez, and Gekkou. It can be bought for 15,000 gil at Baron during the final chapter.

The Dwarven Axe is a level 22 axe that provides +20 Attack, -2 Defense, and Wall Rush HP Damage +5%. It can be obtained from the shop by trading 6,050 gil, Light Axe, Strength Axe, and Transmogridust x8. 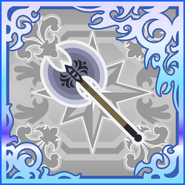 [view · edit · purge]In Germanic mythology, a dwarf is a being that dwells in mountains and in the earth, and is variously associated with wisdom, smithing, mining and crafting. Dwarves are often described as short and ugly. The modern English noun dwarf descends from the Old English dweorg and has two plurals for the word dwarf; dwarfs and dwarves. Final Fantasy uses the latter. Dwarfs remains the most commonly employed plural, but "dwarves" was popularized by J.R.R. Tolkien.