Duster, also known as Dastar, is a village in Final Fantasy III. Located in an island in the middle of the Surface World, it is populated by Bards and Geomancers, and sells Bard and Geomancer equipment, most of which is unique to Duster. The Bards in town will sing about events in history, such as the Flood of Light.

Note: Enemies are encountered around Duster.

"In the Covert Town" from Final Fantasy III (DS)

The background music that plays at Duster is called "In the Covert Town". 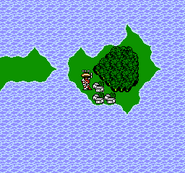 Duster on the world map (NES).