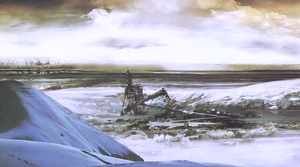 "Dust to Dust" (色のない世界, Iro no nai Sekai?, lit. Colorless World) is a theme from Final Fantasy XIII. It was composed by Masashi Hamauzu and arranged by Mitsuto Suzuki. The lyrics were written by Frances Maya and the vocals were provided by Matsue Hamauzu. Like many other tracks in the game, it features female vocals, evoking a sense of nostalgia and longing for times past.

The vocal part intertwines with the motif of "Blinded By Light", one of the main themes of Final Fantasy XIII, though the overall feel is much slower and wistful.

Nothing left to fear, l'Cie
Cradled in eternity
Shore of sands, your fate awaits
Oh surrender in the light

"Dust to Dust" plays as the background and battle theme for Oerba. It mirrors the feelings of Oerba Yun Fang and Oerba Dia Vanille as they return to their decaying hometown. It also plays when Fang reveals her past to Lightning in Palumpolum.

It is the 9th track of disc 4 on the game's original soundtrack.

"Dust to Dust" plays during Beginner's Primer summary for Chapter 11 and makes a brief appearance as background theme for the Dying World 700 AF with an analogous use for Oerba: it plays as Noel Kreiss is in a dream world created from past memories of his home.

"Dust to Dust" plays in Altar of Judgment, one of the trials in Luxerion Cathedral accessed on the world's final day.

"Dust to Dust" is the thirteenth and final track of the Memories of FFXIII, which is available by default in the music player.

"Dust to Dust" is part of the Final Fantasy XIII Music Pack DLC distributed through the PlayStation Network. It is automatically selected for Arcade and Quick Battles featuring Lightning or Orphan's Cradle.

"Dust to Dust" is one of the playable Field Music Sequences from Final Fantasy XIII.

"Dust to Dust" appears again as a playable Field Music Sequence. It is available to the player by default.

"Dust to Dust" is one of the tracks in this "best of" gramophone record album. It is the second track in Side B.

[view · edit · purge]Dust to Dust refers to "Earth to earth, ashes to ashes, dust to dust", a phrase from the funeral service in the Book of Common Prayer.