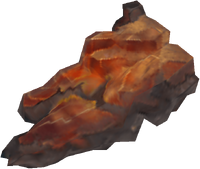 King Raminas entrusted me with a task. Should the time come, he bade me give you something of great importance. It is your birthright: The Dusk Shard. It will warrant the quality of her blood. Only I know where to find it.

The Dusk Shard is a piece of deifacted nethicite cut from the Sun-Cryst by King Raithwall in Final Fantasy XII. Before its identity is revealed, it is referred to as the Goddess's Magicite (女神の魔石, Megami no Maseki?).

The Dusk Shard is one of the three shards of deifacted nethicite used by Raithwall to unite Ivalice, and is stored in Dalmasca, hidden in the Royal Palace of Rabanastre treasury. It can react to the presence of Raithwall's lineage and thus King Raminas B'nargin Dalmasca trusted captain Basch fon Ronsenburg with its location in case it would ever be needed to prove the true heir of the kingdom.

Vaan finds the Dusk Shard hidden in a statue in the palace treasury when he sneaks in to steal. He is discovered by sky pirates Balthier and Fran, also seeking the nethicite. None of them know what the treasure is, but guess it to be valuable, and Vaan refuses to hand it over. He evades the pirates when a battle between the Resistance and the Archadian Empire begins.

In the manga adaptation Vaan is paranoid that Balthier will take the magicite by force, or otherwise demand it in exchange for aid. During the commotion Balthier tosses Vaan onto Fran's hovercraft and follows suit, but the Dusk Shard disables the hovercraft's skystone and the trio crashes into the Garamsythe Waterway. Judge Gabranth and Vayne Solidor ransack the palace treasury after the battle, but cannot find the Dusk Shard. While imprisoned in Nalbina Dungeons, a seeq prisoner steals the Dusk Shard from Vaan, but he reclaims it before the party escapes.

After returning to Rabanastre Vaan hears his friend Penelo has been kidnapped to the Bhujerba and begs Balthier to fly him there with his airship. Balthier is reluctant, but when Vaan offers the magicite as payment he relents.

When the party is captured by Judge Ghis he reveals the utility of a piece of deifacted nethicite to prove the royal lineage of Ashelia B'nargin Dalmasca as a descendant of Raithwall and heir to Dalmasca. Realizing that the Goddess's Magicite Vaan has carried all this time is the Dusk Shard, Vaan reluctantly hands it over to Ghis in exchange for their lives. Ghis sends the Dusk Shard to Dr. Cid.

After obtaining the Sword of Kings, the party hunts down Dr. Cid in the Draklor Laboratory to destroy the Dusk Shard, as well as the Midlight Shard, another piece of deifacted nethicite Cid holds. They are unsuccessful, however, as Cid departs, claiming to be heading to the Giruvegan. The party follows him but discovers they have been duped and Cid was never going that way.

Ashe's quest takes her to the Pharos where they find the Sun-Cryst. Dr. Cid reintegrates the three pieces of deifacted nethicite—Dawn Shard, Dusk Shard and Midlight Shard—into the Sun-Cryst that spills Mist over Ivalice. The Dusk Shard is presumably destroyed when Reddas shatters the Sun-Cryst with the Sword of Kings.

The Goddess's Magicite can be equipped as an accessory to provide 13 Magick Resist, but the wearer's MP will drop to 0, and in the Zodiac versions, the Mist Gauge can't fill.

In the Zodiac versions, it is a rare steal from Belias on Trial Mode Stage 10.

The Goddess's Magicite is a high-rank trade accessory needed to trade for several high-level weapons.

This section about equipment in Dissidia Final Fantasy is empty or needs to be expanded. You can help the Final Fantasy Wiki by expanding it.

Early concept for the Goddess Statue.

Concept art of the Goddess Statue.

[view · edit · purge]Dusk is the darkest stage of twilight in the evening.

[view · edit · purge]A goddess is a female deity with supernatural powers in polytheistic religions. Goddesses most often have female characteristics that are apotheosized in their pure form, and some cases they have rather general for all humans characteristics, both men and women, like Sophia, and other times they can have characteristics that are rather not specific for women like battle and hunting success (Artemis). Thus while they have been, are and may be associated with as wide a range of phenomena as male deities, including war, creation and sometimes destruction (and death), life-giving, healing and compassion, they have been especially associated with beauty, love, motherhood and in prehistoric religions and also later with the Earth, fertility (Mother-goddess cult in prehistoric times).

All of the pieces of deifacted nethicite are named after times of day.