Cid Pollendina: Oh, shut up and help me remodel the Dusk page!
Please expand this article into a full one. The following tasks need to be completed:

His composed demeanor and deliberate manner of speech belie Dusk's unfortunate status as Alba's twin brother. His shirt always tucked in, buttoned down neatly with nary a wrinkle, Dusk is the polar opposite of his more...unrefined sibling. When the Empire's eyes gaze elsewhere, he sneaks out of his dilapidated hut and secretly converses with someone...

Dusk is a character in Final Fantasy Dimensions. He is the older twin brother of Alba, made into one of the Warriors of Light by the Crystal of Lux.

Dusk is a young man with long blond hair with bangs framing his face and has blue eyes. He wears a ruffled white tunic with black armbands that extend to his elbows, a black and silver belt round his waist, black trousers, and brown knee-high boots. He usually wears his shirt tucked in according to his description.

A dominant color for Dusk's job class sprites is white.

Dusk is secluded from the Warriors of Light. Most of the time, he is silent and reserved. During many of the early scenes, he shows off his profound side. He is gentle, serene, sophisticated and shy. When he was younger, he offended Sophia by calling her "Gaunt girl" and was struck by her Thunder spell as a punishment.

Dusk's stats lean towards the magical side, which can benefit magical jobs, with Mind being his highest stat, which can be helpful for the White Mage, and later Seer job. However, since the stat differences between characters are minimal, and abilities and equipment are of greater importance, he can competently do any job. Jobs also gain stats boosts when they level up, which helps evening out stats. He joins with a oak staff, pointy hat, and silk robe. 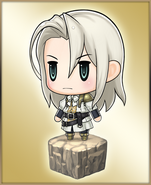 Dusk appears on a card depicting his official artwork.

Dusk and Alba resemble Palom and Porom. They know magic, and are eventually revealed to have come from Mysidia. Dusk is most like Porom, having a talent for White Magic and being the no-nonsense counterpart to the irreverent Alba. However, a flashback in Mysidia reveals he was much like Palom in his youth, including a disrespectful attitude towards the Elder, and having to be fetched by his sibling.

[view · edit · purge]Dusk is the darkest stage of twilight in the evening. This contrasts with his sister's name having the opposite role of twilight.