Wah-ha-ha! Did you think a little thing like the end of the world was gonna do me in? The earth tried to shallow me up once or twice, but I just pried its jaws open and climbed back out!

Duncan Harcourt is a non-playable character in Final Fantasy VI. He is a skilled martial arts master. His sprite is the same as Banon's, but with the same color palette as Locke.

Duncan ran a dojo at Duncan's Cabin outside of South Figaro near Mt. Kolts where he trained students in the martial arts. His two star pupils were his son Vargas and Sabin Rene Figaro. Sabin and Vargas were rivals, and argued over who would take Duncan's place as the new master. Each insisted Duncan favored the other. Vargas, convinced Sabin was to be chosen, apparently killed his father.

When they pass through South Figaro, Edgar, Locke and Terra find this out from Duncan's wife (an old man outside Duncan's cabin will tell the party too). They venture to Mt. Kolts where Vargas gets his comeuppance from Sabin, when he uses a Blitz technique on him.

It was later revealed, that Duncan did not die, and the party can meet him in the World of Ruin, where he trains at his dojo now northeast of Narshe. He teaches Sabin his ultimate Blitz: the Phantom Rush. He then tells Sabin to defeat Kefka with every blitz he taught him. 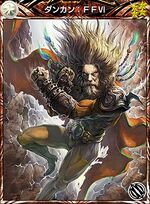 Duncan is a given name. It is an Anglicised form of the Gaelic Donnchadh. Duncan means "chief" or "noble".