Duncan's Cabin is a location in Final Fantasy VI. It is a small house located near South Figaro in the World of Balance, and is the dojo of the martial arts master Duncan Harcourt.

The party can visit the cabin on their way to Mt. Kolts, and Edgar recognizes some of the furnishing of the cabin as evidence that Sabin lives here. Upon leaving, a man warns them that Duncan has been killed by his son and pupil Vargas, and both Vargas and Sabin are now missing. The party can sleep in the cabin freely if they need to rest. The cabin is not vital to the storyline, and the player can choose to skip it entirely if they wish.

In the World of Ruin, the cabin still exists, but its location is not immediately obvious. It is located north-east of Narshe, at a place where five trees on the world map form a "+" shape. Duncan, who is actually alive, has returned to the cabin and continues to train.

When Sabin arrived to the cabin, he is shocked at the sight of Duncan being alive, causing him to cry tears of joy. Duncan then offered to train Sabin once more in order to teach him the ultimate Blitz technique. After the two spar throughout the cabin area, Sabin learned his final Blitz, the Phantom Rush. Before Sabin's departure, Duncan encouraged his student to use all the techniques he learned from his training to defeat Kefka.

There is only one item to find here, a Potion in the pot by the stove. The Potion is no longer present in the World of Ruin.

When the player first comes to South Figaro, they can visit the cabin directly north of the town. Upon entering, Edgar will smell something, and inspecting the stove, the flowers on the counter and the cabinet will prompt small dialogue boxes. Upon inspecting all three, Edgar will realize Sabin has been here on the way out, and an old man will appear outside and briefly talk to the party about Duncan and his two pupils before leaving.

In the World of Ruin, if the player comes to the cabin with Sabin in the party, Duncan will emerge when they attempt to enter, and a cutscene will begin where Duncan teaches Sabin his ultimate Blitz technique, Phantom Rush.

"Kids Run Through the City"

"Kids Run Through the City", the default town theme, plays inside and outside Duncan's Cabin in the World of Balance. It is replaced by "Mt. Koltz" in the World of Ruin.

The Duncan bug can be triggered if the player visits Duncan in the World of Ruin before recruiting Sabin.

An unused dialogue box exists for Edgar after speaking to the old man outside. In the Super Nintendo release, the line is "He must have gone to pay his respects to his mentor, Duncan...", and in the Gameboy Advance release, he says "So, Sabin became a student of Duncan's... All this time, he's been under the wing of such a great teacher..."

Duncan's Cabin on the World of Balance world map (2014 mobile/Steam).

Location of Duncan's Cabin on the World of Ruin world map (2014 mobile/Steam).

Duncan and Sabin at his cabin (2014 mobile/Steam).

Location of Duncan's Cabin on the world map (GBA).

Duncan and Sabin at his cabin (GBA). 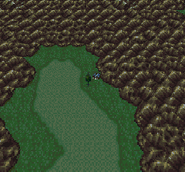