Dun Scaith is a level 60

Alliance Raid in Final Fantasy XIV: Heavensward. It is the third part of the Shadow of Mhach storyline, released in patch 3.5, The Far Edge of Fate.

The ancient tome recovered by Captain Radlia of the Talons tells of a floating refuge—an island created by Mhachi sorcerers to provide safe haven from calamitous floodwaters. With the disaster that befell the Void Ark, however, the island's intended residents never arrived. Cait Sith is convinced that Diabolos has instead claimed this refuge as his own, transforming what was to be a bastion of hope into a voidsent nest of shadowy nightmare. And it is into this fiendish lair that you must delve.

The Lady Radlia stands ready to bear you across the skies. Assault the island, reclaim the Nullstone, and cast your demonic foes into oblivion!

7,200,000
The main deck of Lady Radlia as the ship flies closer to Dun Scaith, a voidsent known as Deathgaze Hollow appears and destroys the guard rails and prepares to attack the party.

Every now and then throughout the fight the boss will summon Void Sprites that will cast Dark II, a long conal AoE along the platform.

After arriving in the ruins the party comes across Ferdiad who welcomes the adventurers and destroys some buildings with one swipe then leaves. After passing through a market area and across a jump pad, the party arrives at the mercantile.

Here there are three Void Crystals that will summon enemies if the cast Void Call is finished.

Another area with Void Crystals, and Unblinking Eyes, the crystals will summon Dun Scaith Parthenopes, and a Dun Scaith Dragon will appear halfway through the fight to cause trouble.

A Bell tower situated atop a wooden scaffold, below is another market area that leads to the Rostrum. The current battle arena of Ferdiad Hollow.

7,616,000
A circle arena with Ferdiad at the center, surprised to see the adventurers make it this far Ferdiad welcomes his guests and the battle begins.

once at 60% the boss will move to the middle of the arena and go invulnerable, here players will have to deal with Ferdiad's Fools to make the boss vulnerable again. After all enemies are defeated the boss will use Jester's Jig to attack the party.

After defeating Ferdiad the alliance comes across roses with blinking eyeballs, and the coffin of the voidsent Queen Scathach.

60
Normally the boss here is the Shadowcourt Handmaiden (ロイヤル・メイドサーバント, Roiyaru Meidosābanto?, lit. Royal Maidservant), but as of patch 3.55a if any players in the raid have the repeatable quest

Unidentified Flying Object she will be replaced by Proto Ultima. Given the presence of 24 players, it is likely that at least one player will have the quest, making Proto Ultima much more common than the Handmaiden.

After two more flare stars the boss will shoot a laser through the middle of the arena and summon three Allagan Dreadnaughts. Here it will cast Supernova with raid wide damage, after he will summon Proto Bits that form donut AoE's. The boss will disappear once more, and let down three Aether Collector's that need to be destroyed or the party wipes.

8,937,600
Here the alliance enters the queen's domain where the boss Queen Scathach awaits them.

throughout the fight the boss will darken the arena and an alliance will be dragged down by shadowy limbs, players cannot move or they will take extra damage. Once under 70% the boss will summon Connla, an add that will need to be kept away from the boss and killed quickly or the party will wipe.

Shadow limbs will appear and tether to two players, they need to look at the limbs to stop them from KO'ing them. After this the boss will move to the center of the arena and go invulnerable, here players need to fight all sorts of enemies before the boss's aether bar fills up. Once the enemies are defeated the boss will use Blinding Shadow, and deal massive damage to the party.

6,130,400
With the defeat of the Shadow Queen Diabolos congratulates the adventurers, and sends them up to the roof of the palace to challenge them once more. A bit into the fight Diabolos will summon Deathgates to summon Hellhound enemies.

Once under 40% he will leave and try to destroy the party by drawing power from a Lifegate, the party needs to keep draining its health to prevent Diabolos from wiping the party.

6,515,040
As the party deflects his orb back at him, he returns and fuses Scathach's power with his and turns into Diabolos Hollow, here players need to keep attacking him and he will begin taking damage again. Successfully reaching this phase will allow the raid to reset from here rather than having to repeat the first phase in the event of a wipe.

Diabolos will summon two Deathgates and a Diabolic Gate, one alliance will have to enter the middle gate to deal with the enemy inside, and the other alliances need to take the other two down, or enemies will appear.

[view · edit · purge]In the Ulster Cycle of Irish mythology, Dun Scaith, also called Fortress of Shadows, is the legendary castle that was home to the warrior woman Scathach, who trained the hero Cú Chulainn in the arts of war. 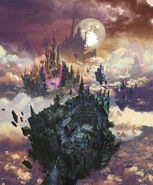 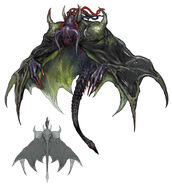 Hall of the Dark Rose