Dullahan (デュラハン, Durahan?) is a recurring enemy and boss in the Final Fantasy series, it first appeared in Final Fantasy III. The Dullahan typically takes on the form of an undead knight.

The Dullahan is fought in Castle Hein as a normal enemy and is the strongest enemy in the area. A stronger variant, called the Thanatos, is found in the Ancients' Maze.

The Armodullahan is a boss from Final Fantasy IX. It can be found in the Fossil Roo passage, where it chases the party down a path littered with obstacles.

The Dullahan is a normal enemy encountered in the Lhusu Mines. Contrary to its other appearances, it is not an undead enemy and is a giant-type instead.

While commonly considered to be a variety of ancient golem, the exact nature of these hulking suits of animated armor is unknown. One theory suggests that they once clad men, and that the original wearer's soul lingered on after death, doomed to spend the afterlife in a prison of steel.

Dullahans are the basis of a family of enemies in Final Fantasy XIV. They are powerful enemies mostly found wandering the game's dungeons. Dullahans themselves can be found in the Proud Creek area of the North Shroud, as well as in the halls of Amdapor Keep.

The player can acquire a Wind-up Dullahan as a minion.

The Dullahan is a boss encountered in the Wine Cellar.

The Dullahan is fought as a boss on Mount Gale. Palette swaps of the Dullahan, the Thanatos, are fought in the final areas of the game.

The Dullahan is a Cyborg-type enemy. 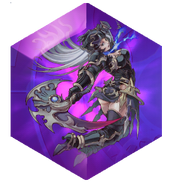 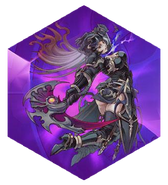 This gallery is incomplete and requires FFVI version added. You can help the Final Fantasy Wiki by uploading images. 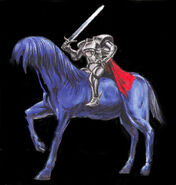 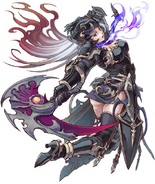 [view · edit · purge]The dullahan is a mythical horseman in Irish mythology, and is described as a headless knight who rides a black horse, or sometimes in a cart pulled by several horses, which moves so quickly the friction of the wheels can set roadside hedges on fire. The dullahan will ride through the night, eventually stopping at the location of a person who is set to die and calling out their name, drawing out their soul and killing them. If seen it will violently retaliate against the watcher, dousing them with blood and using a whip made from a human spine to lash out one of their eyes. The dullahan cannot be barred from travel by locks or gates and cannot be outrun, but it is repelled by golden objects and will turn and flee if one is in its path.