We've defeated many a foe together. Would you consider treating me as one of your comrades?

Duane is a character and summonable vision from Final Fantasy Brave Exvius. A dark knight hailing from Grandshelt, his vision can be summoned by Rain and Lasswell to aid them in their battles.

3★ - No. 0149: A dark knight with arcane power. Duane was a loyal knight in service of a certain country who had reached an impasse in his sword fighting training. Wanting to grow further as a swordsman, Duane turned to the art of the dark blade as the suggestion of a superior. Afterwards he was proud to have reached a skill level on par with that of his comrades', but he was cast out by them upon his return, on the grounds that the use of dark magic was not befitting of a knight.
4★ - No. 0150: A dark knight with arcane powers who wielded a blade infused with magic. Duane learned dark magic as advised by a superior only to be shunned and feared by his peers for his newfound powers. Though he had sought only to grow stronger, the rejection he faced after acquiring his new abilities twisted his mind. He was ultimately banished from the country for slaying several of his erstwhile comrades.
5★ - No. 0151: A knight who wields a blade of dark power. Though Duane can control his prodigious powers as a vision now, the jealousy and malice he endured from his comrades while he was still alive has left his mind scarred. Once pure of heart and mind, his grief grew to such an extent that he eventually took his own life. His spirit now wanders the world as a vision seeking to make amends.
Entries for different versions of Duane.

Once an inhabitant from Grandshelt,[1] Duane was a loyal knight in service to its kingdom. At one point, he reached an impasse in his training with the sword. As he wanted to grow further as a swordsman, Duane follow the suggestion of a superior and turned to the dark magic arts. He learned to infuse his blade with magic.

While Duane was proud to have reached a skill level on par with that of his comrades, he was cast out by them upon his return, on the grounds that the use of dark magic was not befitting of a knight.Shunned and feared by his peers, the rejection he faced after acquiring his new abilities twisted his mind.

Duane was ultimately banished from the country for slaying several of his erstwhile comrades. Subsequently, his grief grew to such an extent that he eventually committed suicide. In his death, Duane left behind a crystal with his memories, to be summoned by those with the power of visions.

Duane's stats at his highest levels are as follows (with no passive abilities taken into account), along with the maximum amount of stat points that can be increased through pot-enhancements:

Duane's Limit Bursts are of the damage-type.

Duane appears in War of the Visions as an Ultra Rare rarity unit, a stark contrast over his original appearance. He debuts in the game's global version as a time limited, double cost unit, whose main job is Dark Knight of Remorse, while his sub jobs are Viking and Dragoon. He eventually makes his debut on the Japanese version as a normal cost and permanent unit, largely as a result of increasingly negative reception over the continuous release of several either time limited or high cost units.

The dark blade, a forbidden sword art which draws from the power of darkness itself.
Duane went to painstaking lengths to master this blade as a young knight, yet his achievements were met with the disdainful gaze of his jealous comrades who feared the power of the dark blade.
He was taken hold of by the darkness in his resulting despair and eventually slayed his fellow knights.
Overcome by the guilt of his actions, Duane then went on to take his own life.
Tortured further in death by deep sadness and regret, he now brandishes his darkness-shrouded blade in search of the light.

Irresistible Darkness is a UR-rarity vision card. It was illustrated by G-ROW Art. 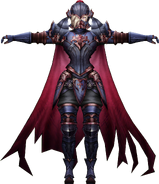 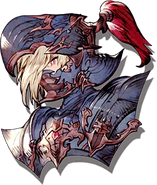 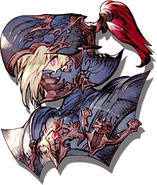 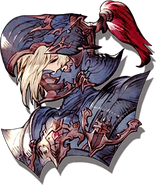 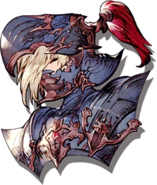 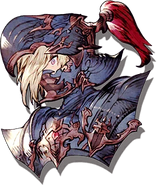