The Dualhead Hydra is a monster from Final Fantasy Mystic Quest, the Fiend of Fire and one of the Vile Four. It can be found in the central room of the Lava Dome. After it is defeated, the Crystal of Fire reverts to normal, and the Volcano erupts. Dualhead Hydra is later reincarnated as the Twinhead Wyvern in Doom Castle.

The creature menaces Benjamin and Reuben with its powerful Fire Breath and many status effect attacks. 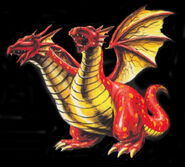 Retrieved from "https://finalfantasy.fandom.com/wiki/Dualhead_Hydra?oldid=3020600"
Community content is available under CC-BY-SA unless otherwise noted.