Dualcast is an augment ability in the 3D version. It is obtained by speaking with the Elder of Mysidia if the player gave three augment abilities to Palom and Porom before they left the party, with each twin having at least one ability each. Dualcast is compatible with Black and White Magic, but not with Summon Magic.

Dualcast can be extracted from the Dark Crystal on the 15th floor of the Depths. The ability is acquired by defeating the optional boss Deathgaze, and can only be learned by Palom, Porom, or Leonora. Dualcast's Charge Time equals the average × 1.2 magic of both spells.

In the 3D versions, the ability is extracted from the Dark Crystal by defeating the Lunar Dragon instead. When beginning a New Game Plus, the ability is inherited and eventually all three mages can learn it in the same save.

Dualcast is the Red Mage's level 4 ability. Dualcast notably works with all types of magic, except Blue Magic and Dark Arts. However, these magic types must still be equipped to be used with Dualcast. Because Dualcast is a form of Red Magic, on its own it gives access to the first three levels of White and Black magic spells without the character having any other magic types equipped.

It is one of two abilities that costs 999 ABP to learn, the other being Mimic. The only drawback is that, to cast, for example, one Time Magic spell and one Summon, the character must be in the Mime job, sacrificing Attack and Items commands. Dualcast will give the character base Freelancer Magic +8.

Dualcast (also called X-Magic) can be used if a character is equipped with the Soul of Thamasa relic. The only drawback is that the character cannot summon the esper s/he currently has equipped.

The W-Magic Materia allows a character to cast two spells in one turn. The somewhat similar Quadra Magic lets the linked Magic or Summon Materia be cast four times for the cost of one casting.

Dualcast is an Independent Materia bought from the Network Shop Shade and found in a chest during mission 9-4-1. When any Magic Materia (except Flare and Ultima) is used while Dualcast is equipped, it is cast twice in succession.

Doublecast is a Special ability that allows a character to cast two Black Magic spells in a row. It is located in Lulu's section of the Sphere Grid, but several locks must be passed first. In the Expert Sphere Grid, it is the final ability on Lulu's path.

In the first battle against Seymour, if the player defeats him with the first spell of a Doublecast and the second deals 6,000 or more damage, Seymour won't summon Anima and the game will glitch.

Lulu's Overdrive, Fury, allows several successive spells of one type to be cast. Seymour Guado and Seymour Omnis have the ability to double-cast or quadruple-cast the same elemental spell.

Chainspell is the level 1 Red Mage's special job ability. All of the user's spells have both their casting times and recast timers reduced to 0 seconds, save for casting animations which naturally cause a 2-3 second delay between casts, therefore still disallowing casting while the user is in motion. It can be recast every 1 hour.

This applies even for spells that aren't normally available to Red Mage, such as Ninjutsu, if utilizing a Ninja subjob. However, the activation of Chainspell does not cause any spells that are already recharging to immediately become available. MP costs of spells used while under Chainspell's effect are not reduced or affected in any other way.

Chain Magick is an enemy-exclusive ability that grants the user zero Charge Time of any subsequent spell casting. However, one must wait for the action animation to end before proceeding the next action; this can be further prolonged when the Effect Capacity is saturated in the PlayStation 2 versions.

It can be used by Shemhazai, Mateus, Demon Wall (Inner), King Bomb, Judge Bergan, and The Undying.

Dualcast (sometimes called Chainspell) is a key trait of the Red Mage, available at all levels. Upon casting a spell with a casting time, the player will gain the Dualcast effect, allowing them to instantly cast their next spell (this includes extremely powerful spells, such as Verraise, or spells that are not part of the Red Mage's skillset, such as Drain). The effect is canceled if any weaponskill or non-spellcasting action is used instead.

Dualcast is an Elemancy effect that casts a spell up to two times. First is guaranteed, then:

Doublecast is learned by Red Mages via the Madu. It allows the unit to cast two spells from both of the A-Ability sets if possible. Doublecast works with White, Black, Summon, Spirit Magic, as well as certain Corner abilities. Though Black Magic is inaccessible to Viera, the only race that can learn Doublecast in the game. Doublecast can also be used to avoid some elemental, skillset, target area, and Dmg2 laws because Doublecast is seen by the game as a non-aggressive, non-elemental, single target, Red Magic ability. It is also one of few abilities to cost 999 AP to master.

Doublecast is learned by the Red Mage for 990 AP via the Madu rapier. The spells used in Doublecast are sensitive to elemental laws.

Twinspell allows a character to equip two spells at once. It can be learned by all characters at different levels.

The Sage's Spell Again ability lets the character continuously cast the spells they have equipped until they run out of AP.

Doublecast is the level 20 ability of the Red Mage class, which allows the user to cast two spells of any equipped spellsets set on the character. If the character has no magic commands, Doublecast will display nothing. It requires two slots to equip and use.

Terra's EX Mode bonus Chainspell allows her to use her magical attacks twice in succession.

Terra's ability "Chainspell" returns as her ability in EX Mode as well as Regen, Critical Boost, and Glide.

Dualcast is a special ability learned by Vivi (level 45) and Shantotto (level 55), and costs 22 CP to equip. Dualcast doubles the power of all magic abilities used by the character.

Dualcast is a proactive ability that costs 22 CP to equip. It is active for the entire length of the stage. It multiplies effects of magic-type abilities by 2 and only applies to the character equipping it. It is learned by Lenna (level 80), Terra (level 85), Vivi (level 85), Garnet (level 90), Shantotto (level 90), and Chaos (level 85).

Dualcast is the ability that is used by the Red Mage during battle.

Several early Soul Breaks are presented as doublecasted spells, such as the core Red Mage's and Vivi's earlier Soul Breaks.

Some Record Materia and Legend Materia grant the ability to doublecast abilities of a certain type of element or school, without consuming extra ability uses. The chance to doublecast varies by Materia.

Certain Ultra Soul Breaks allow a character to use an ability twice in one turn, while consuming two ability uses. This effect does not trigger if the ability does not have two or more uses left, and will not work with Burst Mode commands.

Most Awakening Soul Breaks allow characters to dualcast abilities at no cost, as those Soul Breaks grant infinite ability uses for the duration of their effects.

Use magic twice in one turn

Appearing alongside Dual Black Magic, Dualcast (れんぞくま, Renzokuma?) is an active special ability that allows its caster to use any of three magic types—White Magic, Black Magic and Green Magic—twice in one turn. While it costs 0 MP, the caster's MP will decrease in accordance to the sum of the spells' cost: for example, Curaja (which upon normal casting conditions costs 15 MP) would cost 30 MP to cast twice.

Chain Magick used by The Undying in Final Fantasy XII. 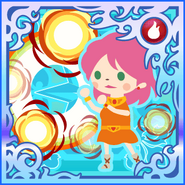 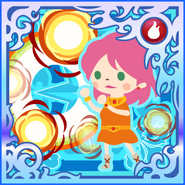 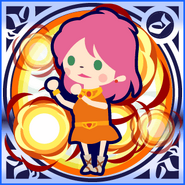 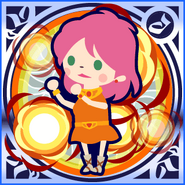 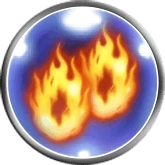 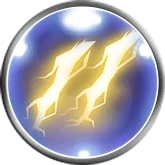