Grants the ability to equip a weapon in each hand.

Dual Wield (にとうりゅう or 二刀流, Nitōryū?), also known as Dual-Wield, 2-Handed, Two Swords, or Double Sword, is a recurring support ability in the Final Fantasy series, although some games feature it as simply an innate part of their equipment systems. It is usually associated with the Ninja job. Like its name suggests, it allows characters to equip a weapon in each hand and thus attack twice, using each weapon once.

All characters can dual-wield any weapon type except for bows. A character can also dual-wield shields, which provides greater Evasion at the cost of being unable to attack physically. Using a second weapon or a shield in conjunction with another weapon halves the Strength bonus to Attack, and weapons held in a character's off-hand have their Strength bonus halved again. A character gains equal experience for both weapons held, even if they are of the same type; this allows for much faster weapon skill growth, even against enemy formations of low Rank.

In the NES version, dual-wielding is ineffective due to the dual wield bug.

Dual Wield is the innate ability for all jobs, so every playable character can equip two weapons or shields. A character that dual wields shields will attack their target unarmed.

Yang and Edge can equip weapons in each hand. The weapons count as the same attack, and Yang and Edge cannot use them to attack twice. The Hero's Shield can be dual-wielded by Yang and Edge; if done so, they will attack with their barehands.

Yang and Edge can equip weapons in each hand.

Dual-Wield is the level five ability for the Ninja class, learned for 450 ABP. It can be used in a very deadly combination with the Rapid Fire and Spellblade abilities.

The Genji Glove relic allows a character to equip a weapon in each hand except for Unarmed due to it not being compatible. Due to the Genji Glove bug, damage is reduced by 25% whenever a character equips the Genji Glove, but only one weapon. The damage algorithm was supposed to give this reduction when two weapons are equipped.

The Jump glitch involves using two weapons with the Jump command; after the player initializes the command, Jump will pick one of the two weapons to use, though the graphic of the weapon in the right hand of that character will be used all the time. If either of these weapons is a spear, regardless of which weapon the command chooses, the damage will always be doubled.

Blue Mages can obtain it as early as level 80 by equipping at least two of the three spells: Blazing Bound, Animating Wail, or Quadratic Continuum. Higher levels in Dual Wield can be obtained by the Ninja and Dancer job classes to reduce the delay added by wielding two weapons at once.

Pugilist, Rogue, Monk, Ninja and Dancer, use a pair of weapons and attack with both hands, although their weapons are treated as one weapon for equipment, meaning they will always use a pair of the same weapon and their attacks are calculated the same way as every other class.

Wield a weapon in each hand, attacking twice each turn, even if not a ninja.

The character will attack with the weapon in the top slot first. This is be important if using a Sleep Sword when dual wielding, as equipping the Sleep Sword in the top slot would render the potential Sleep, useless as the second attack would simply wake the enemy up.

Enables two attacks with weapons in both hands.

Ninjas learn the ability Double Sword from the Nosada for 999 AP. It is effective, as it not only allows one to equip two weapons, but by doing that, one will be able to learn two abilities at the time, or learn one ability at twice the speed. This applies to all jobs, as long as Double Sword is the set support ability and that the weapon equipped has a skill that can be learned. If the weapon is a two-handed weapon, double sword is nullified, which means no dual wielding of bows, greatswords, or greatbows.

There is no need to classify other weapons (spears, maces, broadswords, rapiers, etc.) as being available for dual-wielding because only humans can dual wield, and there are certain weapons only available for other races to equip.

Ninjas can learn the Dual Wield ability from the Ragetsu-denbu for 990 AP. It allows the user to equip two weapons. While humes can equip books, and in the case of the Agent class, guns, neither can be dual wielded, the second due to the Agent being unable to change jobs. This is one of the few abilities that requires 990 AP to master, along with the Ultima abilities and the Red Mage's Doublecast.

Dual Wield is the final ability for the Ninja class, requiring 625 AP to learn. It requires 2 slots to equip and use.

Onion Knight gains the Dual Wield ability in his EX Mode. It boosts the damage done by his physical attacks and makes them do more hits. Dual Wield is also referenced in Bartz's EX Burst "Spellblade-Dual Wield-Rapid Fire", and features him using two weapons at a time to strike opponents.

A job that can Dual Wield will be able to hold a weapon in each hand. Both weapons must be of the same type, for example if a dagger is in the right hand, the only weapon available for the left hand will be another dagger. Weapons that can be dual-wielded include swords, axes, daggers, spears, ninjato, clubs, bells, and firearms. An Explorer with a weapon in each hand will attack twice with each attack.

Chocobo, while as a Ninja, can use dual wield. Instead of allowing Chocobo to fight with two weapons, it increases his walking speed. It costs 400 JP to learn and 2 SP to use.

Dual wielding can be done with all jobs, but equipping a weapon in both hands will apply an P.Atk penalty to both weapons. Dual wielding will not reduce M.Atk or any other stat bonuses, making dual wielding effective for mage jobs.

Dual Wield is the support ability learned by Ninja job in Bravely Default and Bravely Second: End Layer. It negates the penalty to weapons' P.Atk that typically applies when equipping weapons in both hands. 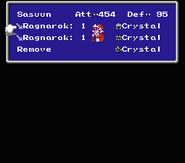 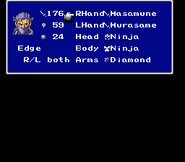 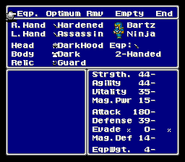 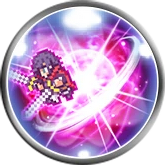 Dual-wielding is using two weapons, one in each hand, during combat. It is not a common combat practice, since it does not offer much advantage. Although historical records of dual-wielding in war are limited, there are numerous weapon-based martial arts that involve the use of a pair of weapons.

The Japanese name of dual-wielding ability in the Final Fantasy series is Nitōryū (二刀流), literally means "dual swords". It is a Japanese dual-swords-wielding technique made famous by the legendary swordsman Miyamoto Musashi. Usually, swordsmen using nitōryū style wield a katana in one hand, and a wakizashi in another hand. In kendo competitions, nitōryū competitors are allowed to wield two kendo sticks, but the shorter stick cannot earn them any score and only meant to be used for defending.