Order of the Southern Sky

Goltanna is the Duke of Zeltennia and is represented by the Black Lion crest. He is defended by the Order of the Southern Sky knights.

Goltanna's plan for achieving power hinges on Princess Ovelia, one of two potential heirs to the throne of Ivalice. If Ovelia becomes queen, Goltanna can become her regent. However, if Prince Orinus becomes king instead, Larg will likely end up as the regent. Larg's assistant, Dycedarg Beoulve, attempts to have Ovelia kidnapped from Orbonne Monastery and killed, but is unaware that kidnapper Delita Heiral is a double-agent working for Goltanna.

While Delita is eventually forced to hand Ovelia over to his childhood friend Ramza Beoulve, who is fighting for neither side though he is Dycedarg's half-brother, a run-in with Cardinal Delacroix has Ovelia once again fall into Delita's hands, and she is delivered to Goltanna.

The king dies, and both Larg and Goltanna attempt to enthrone their candidates and the War of the Lions breaks out. It culminates into the Battle of Fort Besselat, where the knights of Order of the Northern Sky besiege the Order of the Southern Sky fortress.

During the battle, an engineer named Barich Fendsor, working for the Church of Glabados that has secretly orchestrated the war, spreads Mossfungus poison throughout the Northern Sky ranks, making it seem as though the Order of the Southern Sky will win. Ramza arrives and brings the battle to a dead halt by opening the Fort Besselat sluice. Goltanna attempts to have his men march outright through the water, but Delita betrays the duke and kills him.

A leader in command of several hundred knights, holding a title high even among the aristocracy.

This is a story-related job used in cutscenes and serves no purpose in battle as there is no abilities associated with it. Curiously, the developers did take time to give it a job description.

Galthena appears as a card in the Ivalice Special Arena has a limited-time special arena with eighteen floors. 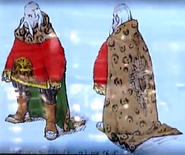 Earlier artwork shared by Yasumi Matsuno May 19, 2018 in a livestream.