Droma is a boss in Final Fantasy VIII, encountered in the Art Gallery of Ultimecia Castle. Two Dromas accompany Trauma.

Droma is spawned occasionally by Trauma. Trauma will also Drain from Droma, eventually killing them. Once all Dromas are gone, Trauma will use Mega Pulse Cannon. Dromas themselves are capable of using a smaller version of said attack, aptly titled Mini Pulse Cannon.

-Flying enemy.
-Does not have to be defeated to win the battle.

Concept art of Trauma and Droma. 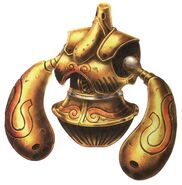 Droma's Japanese name is from French alignement meaning "alignment." This is most likely in reference to stone alignments to continue the megalithic theme and allude to there being multiple beside Trauma.

Droma may be a portmanteau of "Drone" and "Trauma."