Final Fantasy VII Remake includes mechanics for dresses that alter the dresses worn by Cloud Strife, Tifa Lockhart, and Aerith Gainsborough in Chapter 9, "The Town That Never Sleeps". Based on player actions during and before this chapter, Cloud, Tifa, and Aerith will wear one of three dresses each in Wall Market. The player cannot partake in battles while wearing the dresses.

The dress mechanics resemble those of the original Final Fantasy VII, in which collecting items by completing objectives throughout Wall Market in "To Corneo Hall" alters whom Don Corneo will pick as his "bride"; getting the best dress for Cloud resulted in him being picked.

Each of the three characters' dress outcome is determined during a different chapter in the game. Tifa's dress is determined by actions taken in Chapter 3, "Home Sweet Slum", while Aerith's dress is decided in Chapter 8, "Budding Bodyguard", and Cloud's is decided in Chapter 9, "The Town That Never Sleeps". After the first playthrough, to change the dress, the player will need to select a prior chapter, save after completing it, and then select "The Town That Never Sleeps" to see the options change.

Many of the decisions regarding the dresses Tifa and Aerith wear also alter affection mechanics, and players can complete both objectives at once.

Tifa's three dresses are "refined",[note 1] "sporty", and "exotic". The refined dress, her default, is an indigo minidress with matching heels and large golden moon earrings, similar to the dress she wore in the original game, and is the only dress with a "western" look to it; her other two dresses have "eastern" looks to them. The sporty dress is a black leopard print cheongsam with her hair up in "odango" buns, while the exotic dress is a short black kimono-style dress with various flowery accessories.

To choose the sporty or exotic dress, the player must complete all Odd Jobs in Chapter 3, "Home Sweet Slum", to unlock the quest "Alone at Last", in which Cloud speaks to Tifa in her apartment. She will ask Cloud what type of dress she should wear for their night out later, and the options are "Something refined", "Something... sporty?", or "Something exotic?" To get the refined dress, the player can simply skip all the sidequests, or skip "Alone at Last".

In "Budding Bodyguard", some sidequests are quicker to complete than others. If the player only wishes to complete three on replaying the game, "The Mysterious Moogle Merchant", "Kids on Patrol", and "A Verified Hero" are possibly the easiest to complete.

Cloud's dresses differ wildly, and depend on the sidequests completed in Chapter 9, "The Town That Never Sleeps". He can either wear a black and blue dress, a lavender dress, or a simple black dress.

The simple black dress is the easiest, and is unlocked by skipping all sidequests. The other two are unlocked depending on which sidequest path is completed, which in turn depends on dialogue choices made during the chapter.

Cloud will also wear special earrings if the player does well in the Honeybee Inn rhythm minigame.

After a first playthrough, chapter selection will allow the player to see all three dresses for each character. It is only required to select and replay chapters 3, 8, and 9, meaning after completing a chapter and saving, the choices are then updated for all subsequent chapter. The chapter must be completed entirely for this to work, after which, the player can switch to the next relevant chapter to alter the outcomes.

It is possible to see all three dresses for each character by only completing three playthroughs of each chapter. In two of these playthroughs, the player must complete all of Chapter 3, "Home Sweet Slum"'s sidequests, selecting a different choice for Tifa's dress, and complete all of Chapter 9, "The Town That Never Sleeps"'s sidequests, selecting a different choice from Madam M to alter Cloud's dress each time. On one playthrough of each chapter, the player can forego sidequests entirely to get the default options.

One sub scenario that was planned as part of development but which did not make it to the final game was Marle helping Tifa pick a dress for her Don Corneo infiltration mission, and how Tifa prepared for the mission before getting on Sam's chocobo carriage. The scenario was in the game until the latter half of development, but was cut due to time constraints.[1][2]

Aerith's red dress was designed to look like a tango and flamenco dress, whereas the light pink dress was drawn to look cheap. Roberto Ferrari stated that the pink long dress was his personal favorite.[3] For Tifa's alternate Wall Market dresses, the developers chose the Chinese-style and kimono dress to provide a cultural flair. Other ideas included a dancer outfit, maid outfit, police uniform, or a chocobo bikini.[4]

Tifa wears a crescent moon charm accessory for an earring in her "refined" dress for Wall Market. A moon earring was already part of her design in the original Final Fantasy VII.

Cloud's usage of braided hair extensions in his first two dresses has been compared to American pop star Britney Spears as she appeared in the music video for her 1998 debut single, "...Baby One More Time".[6]

Aerith has a Play Arts -Kai- version with her Wall Market red dress. 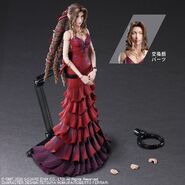