The Dreamscape, also known as Dream Dungeon and Cyan's Dream/Cyan's Soul, is a dungeon in Final Fantasy VI. It is a dream world formed from the mind of Cyan Garamonde, and is a reflection of the pain and hardships he has been through in his life.

When the party returns to Doma Castle in the World of Ruin with a party of four members including Cyan and rests there, the Dream Stooges—Laragorn, Curlax, and Moebius—attack Cyan and enter his soul, and the party follows.

The party awakens separated in a mysterious plane full of doors and floating pathways. They regroup and defeat the Dream Stooges, and begin advancing through Cyan's dreamscape, first visiting an area resembling the Phantom Train, and then a mineshaft where they are inexplicably wearing Magitek Armor. A bridge in the area collapses and drops the party into a replica of Doma Castle.

In Doma, the party finds Elayne and Owain, Cyan's late wife and child. The two explain to them that a being called Wrexsoul, a spectre formed from the spirits of the dead slain during the War of the Magi, is tormenting Cyan. The party confronts and defeats Wrexsoul, freeing Cyan. Elayne and Owain appear to him, and console him before departing, leaving a sword behind. Cyan awakens and his heart is cleared of doubt, allowing him to realize his true potential in combat.

The dream versions of the Phantom Train and Narshe Mines.

The Dreamscape is composed of four areas, seemingly inspired by Cyan's past adventures during the game and symbolizing his fears and regrets: his hatred of machines, his guilt over losing his family and Doma, and his powerlessness against his enemies.

The first area is a void of space with disconnected white walkways floating in it, and doorways that teleport the party to other walkways when they enter them. The exit from the area is guarded by the Dream Stooges. After this, the party enters a recreation of the Phantom Train where Cyan is fleeing from ghosts, and the cars contain puzzles involving treasure chests and switches that change the environment. The third area is a mineshaft seemingly unrelated to a past location, but roughly resembling the mines of Narshe, where the party rides Magitek Armor and encounters exclusively mechanical enemies.

The final area is a recreation of Doma Castle with images of Cyan's past with his family around the castle, and some areas are blocked off, including the castle gate that would normally exit to the world map.

There are only treasures in the Phantom Train area of the Dreamscape. The Doma Castle area contains the same treasures as the real Doma Castle, and if they are taken in one they are unobtainable in the other. If the player has not already looted Doma, it is preferable to do so before entering the Dreamscape to avoid dealing with random encounters.

In the second car of the Phantom Train is a chest surrounded by a crate on each side, as well as a switch nearby. Pulling the switch moves the crate to the left of the chest, making it reachable by running around the seats, but this is only temporary, as the crate will move back to its original position after a short period, and the switch will reset. Reaching the chest in time is only possible with the Sprint Shoes. However, there is a trick to gaining access to the chest without them: the player needs to pull the switch a second time before it resets, which moves the left-hand crate back its original position, but also moves the crate to the right of the chest, allowing the party to open it and obtain a Genji Glove. After the chest has been opened, the crates will remain in their current positions and the switch can no longer be interacted with.

A chest in the same car is blocked by a chest that moves to block the party; a nearby chest contains the key Lump of Metal that can be placed in the chest to stop it from moving, letting the party reach a chest behind it which contains a Flame Shield

The next car has two chests with no obstacles. The chests contain an X-Potion and an Ice Shield.

When the party completes the Dreamscape, Cyan automatically receives the Masamune, and the magicite Alexander appears in the throne room of Doma Castle, and can be retrieved in the real world.

The party battling the Dream Stooges (top), and Wrexsoul and the Soul Savers (bottom).

In the next area, the Phantom Train, the path to the left is linear until the second car is entered. Pull the switch nearby twice to reach the chest, which contains a Genji Glove. Go all the way to the left and open the chest to obtain a Lump of Metal, and place it in the open chest in front of the closed chest to stop it moving, allowing the party to reach the chest behind it with a Flame Shield. Then move on into the next car.

There is a puzzle to solve involving the switches here, which manipulate parts of the scenary to open and close paths. The order in which to pull them, numbering them from left to right, is: 3, 1, 3, 2, 3, 1. After this, the party can get by on the very bottom edge of the car. The six empty chests here must be closed in the same pattern as in the previous car - lower-left, lower-center, and upper-right are closed. Pull the switch then to open the path. Go left (the car here contains a save point) and enter the engine, the party progresses to the next area upon leaving the engine no matter what they do inside.

The two optional scenes within the dream version of Doma Castle.

In the mineshaft, there will be a short scene of Cyan being chased by soldiers, then go outside. Go to the right and enter the cave. This area is a trick, and the party will loop continuously going counter-clockwise. Instead, after entering the cave, immediately exit again to be taken to a different area than before. After Cyan crosses the bridge, follow him; the bridge will collapse and drop the party into the sleeping room of Doma Castle.

In Doma, there are some optional flashbacks that can be viewed by visiting Cyan's room, and by going outside and going to the far left and far right ends of the walkway. Enter the throne room to initiate a battle with Wrexsoul. When it is defeated, Cyan will receive the Masamune and automatically learn all of his Bushido techniques. This concludes the quest.

Note - some doors lead to the same location as others. 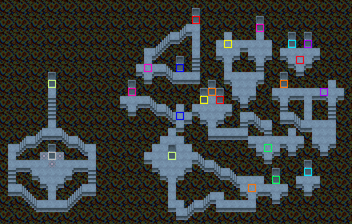 "The Phantom Forest" plays inside of the Dreamscape.

The Dreamscape is the setting for two regular dungeons and is also featured in the Challenge Event Touched by Magic.

The Dreamscape is one of a handful of areas that cannot be revisited, so if the player wishes for Gau to learn the Rages of any enemy here, they must meet all the appropriate enemies during the exploration.

In the SNES and PS1 versions, there is no way to access the parapet of the castle in the Doma Castle portion of the Dreamscape. This is due to a developer error; the exit to the parapet still exists in the same spot as in the real world, below the door to Cyan's room, but it was placed one tile too far to the right, putting it inside a wall the party cannot reach. This was fixed in the Game Boy Advance and later versions.

Phantom Train in the Dreamscape (2014 mobile/Steam).

Dreamscape is a compound word made up of the stems "dream" and "landscape" meaning a fantasy world or an abstract/oneiric land.