Dream Zanarkand is a location in Final Fantasy X that exists far out on the sea of Spira and is known as a city of light that never sleeps. In the English localization, Zanarkand is pronounced [ˈzænərkənd].

Though not named in the game to differentiate from the ancient city state of Zanarkand, the city on the water is called 夢のザナルカンド ("Dream Zanarkand") in Pictlogica Final Fantasy and in the Final Fantasy 25th Memorial Ultimania Vol.3.

Let's go to the sea, before the sunrise. The city lights go out one by one. The stars fade... Then the horizon glows, almost like it's on fire. It's kinda rose-colored, right? First in the sea, then it spreads to the sky, then to the whole city. It gets brighter and brighter, till everything glows. It's really... pretty. I know you'd like it.

Tidus describing his Zanarkand to Yuna

Dream Zanarkand is a reproduction of the metropolis of Zanarkand before its destruction, created directly from the memories of its former inhabitants; its buildings, citizens and lifestyle are replicated from the fayth's memories to exist eternally as an image to its former glory. It is located somewhere near Baaj Temple[1], but cannot be easily accessed by anyone living in Spira and its whereabouts are only known by Sin.

A thousand years ago the cities Zanarkand and Bevelle were at war, which came to be known as the Machina War. Unable to stop Bevelle's armies, the leader of Zanarkand, Yu Yevon, sacrificed his people by turning them into fayth to preserve the metropolis in a dream state at the height of its power, and to summon a creature of unspeakable power to defend it: Sin. Yu Yevon only gave the creature two objectives: to defend Dream Zanarkand's summoning and to destroy large cities or cities that relied heavily on machina to prevent mankind from ever attaining the means of discovering the city of dreams.

In Spira, life essence or energy is represented by pyreflies and the act of summoning allows the summoner to manifest pyreflies that naturally exist in all planes of life into forms "dreamed" by the fayth. This is how Dream Zanarkand and all its inhabitants were born. The fayth summoning Dream Zanarkand reside on Mt. Gagazet, the Ronso's holy mountain, and only summoners on a pilgrimage ever cross its peak and witness the sight of hundreds of fayth summoning at once.

Despite being a replica of the Zanarkand of ancient times, there are some differences. As Dream Zanarkand is located far out on the ocean, it is surrounded by water and its inhabitants believe it to be the entirety of the world, having no knowledge on the lands beyond. Thus Dream Zanarkand, unlike the original Zanarkand, is a peaceful place that knows no war. The world of Spira is infested with fiends, but in Dream Zanarkand they are rare, with Tidus saying it was a big deal if one showed up.

Although not stated outright, it is possible that the citizens of Dream Zanarkand are made in the image of the people who used to live in the original Zanarkand; as the cityscape is born of the fayth's collective memories, it may mean the citizens are as well. The Final Fantasy X-2: International + Last Mission Ultimania posits that Dream Zanarkand was created as the ideal representation of Zanarkand, a wish given form. Since the original Zanarkand was the model for everything in Dream Zanarkand, this extends to its inhabitants, who would marry one another and have children, continuing the cycle of life. Thus the genes of Dream Zanarkand's inhabitants blended to form a unique populace.

Dream Zanarkand appears to be stagnant, with no notable technological advancement having taken place during the entirety of its existence. Even if the inhabitants are mere dreams of the fayth, it is shown that once the fayth have given them form they develop a mind of their own and their souls can ascend to the Farplane upon death.

Tidus is a citizen of Dream Zanarkand. His father, Jecht, was a famous blitzball player who went missing ten years ago while out on the sea. Tidus's mother was devastated and some time after she passed away, leaving Tidus orphaned. Tidus followed his father's footsteps and went on to play for the Zanarkand Abes. He is mentored by Auron, a man with a mysterious past who one day showed up in Dream Zanarkand and has been looking out for Tidus ever since.

Tidus lives in a boat-house and has become the star player of his team. One day, he makes his way to the stadium where the Jecht Memorial Cup is to be played, but during the game a gigantic wave emerges over the city and destroys the stadium. Tidus experiences the slowing of time and meets a child who appears to know him. Auron picks Tidus up from the stadium's main gate and takes him to confront the giant wave that scatters creatures known as Sinspawn throughout the city. Tidus and Auron fight their way through the hordes of Sinspawn to the seaborne monster, which sucks Tidus up into a core of light. Final Fantasy X Scenario Ultimania explains that Sin's destructive instincts activated when brought near Dream Zanarkand, and it began destroying the city, but Yu Yevon later repaired the damage once Sin had left.

After Tidus is taken from Dream Zanarkand by Sin and left floating ashore in Baaj, Dream Zanarkand is not visited again although Tidus speaks of it frequently, hoping to find his way back home. Tidus finds that in the world he ends up in no one has recollection of his Zanarkand, and everyone talks of it as a holy place that was destroyed a thousand years ago, and gradually Tidus gives up hope of ever going back.

Tidus joins summoner Yuna on her pilgrimage, and as they cross Mt. Gagazet to reach the ruins of the original Zanarkand, they come across Fayth Scar. Tidus falls unconscious and finds himself back home in Dream Zanarkand. The child he met during the time Sin attacked Dream Zanarkand is revealed to be Bahamut's fayth, who tells Tidus the story behind Dream Zanarkand.

Bahamut works as the spokesperson for all the fayth in asking Tidus to defeat Yu Yevon whose spirit resides within Sin, as over the course of the millennium the fayth have grown tired of summoning Dream Zanarkand and simply want to rest. Tidus promises to try, even with the knowledge that if the fayth stop dreaming he will disappear.

Tidus, along with Yuna and rest of her guardians, defeat Yu Yevon inside Sin's core. As Yu Yevon's spirit is put to rest, it stops summoning Dream Zanarkand and the fayth are set free; their souls depart to the Farplane, the pyreflies used to manifest Dream Zanarkand scatter, and both the city of light and Tidus fade from existence.

The original plot had a much longer and wildly different opening sequence at Dream Zanarkand.[2][3] In the early drafts Tidus would have been swimming around the ocean near Registan (later renamed Zanarkand) to the theme of "Hymn of Fayth", then visit a place called "Yevon Dome" where he would have met up with his friends, a male and two females. They would have checked the time and thought it was getting late. The Yevon Dome would have been a place where the founder of Registan, Yevon, would have been worshiped. It was a large bowl-shaped arena where Registan's populace would come to meet with friends and offer up their prayers.

Monsters would have begun attacking the city but Auron and the Crimson Blades would have fought them off. Before it was decided Auron would be an unsent, he was envisioned working as a Crimson Blade exterminating monsters in Registan. There were also plans to make Tidus the unsent, but due to the release of the film Sixth Sense with a similar plotline, the storyline was given to Auron. There were also plans of having Auron be Jecht in disguise. This way, Jecht could have been watching things all along, but because the developers didn't want Jecht to have a leading part in the game, they gave up on the idea.[4]

The concept of Dream Zanarkand was carried over to create the Imperial City of Archades in Final Fantasy XII.[5]

Promotional artwork of Auron across both Dream Zanarkand (left) and true Zanarkand (right). 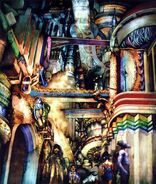 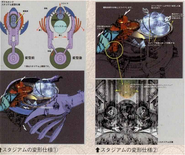 Entrance to the Stadium in Dream Zanarkand.

Entrance to the stadium after Sin attacked.

Tidus and Auron fight their way through Dream Zanarkand.

The name Zanarkand comes from Samarkand,[6] [view · edit · purge]Samarkand is a city in modern-day Uzbekistan that was once a wealthy city on the trade lines between China, India and the Arabic empires.

In the original plot draft for Final Fantasy X, Zanarkand was called Registan, but the name was changed because an actual place of the same name exists. It was Kazushige Nojima's idea to use a name ending in either "-stan" or "-kand".[6]

Final Fantasy X draws a lot of influence from eastern religious practices, especially Buddhism. In Jodo Buddhism, a branch of Buddhism centered on the doctrines and practice of Amitābha Buddha, its founding story describes the monk Dharmākara ascending to Buddhahood and discovering the power to establish a buddhakṣetra, a realm beyond reality founded by a Buddha's own merits. Naming his world the Pure Land and becoming Amitābha Buddha, he vowed to make his world a paradise to which all peoples of his faith can enter and transcend into Buddhahood with ease to help the rest of the world. This is somewhat similar to Yevon creating Dream Zanarkand.