This man's soul is ours! Bon appetit!

The Dream Stooges are three demon brothers in Final Fantasy VI: Laragorn, Curlax, and Moebius. They are devourers of souls who attack through dreams.

When the party visited Doma Castle with Cyan and stayed the night, Cyan did not wake up come morning. As the party tried to rouse him, they sensed the presence of the Dream Stooges and they bounced into the room, announcing their names and intent to steal Cyan's soul. They leapt into Cyan and the party followed.

Laragorn, Moebius and Curlax are fought as bosses within the Dreamscape. 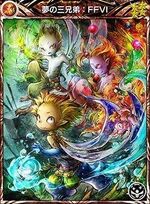 The stooges appear on cards. Moebius has a Lightning-elemental card. Laragorn has an Ice-elemental card. Curlax has a Fire-elemental card. Laragorn has the ability to remove himself from the Field and return on the next turn, while Curlax can move Laragorn and Moebius in the Break Zone to the Field, approximating their battle abilities. Moebius is the one of the trio to be able to use Delta Attack, which prevents an opponent's Forward from attacking, Blocking, or using abilities, as long as the player controls a Forward with the job "Three Dream Stooge". Curlax and Laragorn support Moebius with innate abilities that allows the player to treat their card names as Moebius while in the hand, so the player may use them to pay the cost to use Delta Attack if a Moebius card is not available. 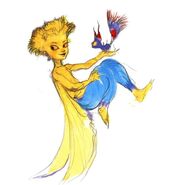 Laragorn, one of the Dream Stooges.

The Dream Stooges in battle (iOS/Android/PC).

The brothers' names in the SNES version are Larry, Curly, and Moe, a reference to the American slapstick comedy trio, the Three Stooges. The GBA version adapts these names into puns that are less obvious: Laragorn, Curlax, and Moebius. It is possibly unintentional given this background, but the modified name "Moebius" bears a similarity to "Morpheus", a Greek god of dreams.

Early development materials refer to the trio of bosses in the Dreamscape using the names Gris (グリ, Guri?), Renoir (ルノア, Runoa?), and Cézanne (セザン, Sezan?).[1] These were to reference the the impressionist painters Juan Gris, Pierre-Auguste Renoir, and Paul Cézanne respectively.