The Dreadnought (大戦艦, Daisenkan?, lit. Great Warship) is a Palamecian ultimate airship in Final Fantasy II. A giant warship, it can crush entire towns from the air. It is accessible once the player obtains the Sunfire at Kashuan.

After boarding the Dreadnought the player must get past a guard. The Pass item can be presented to get past, or the player can select the Wild Rose key term to engage in a battle against the Captain enemy, who, once defeated, will be removed to let the player pass. All other soldiers on the ship will start an encounter against a Captain enemy, but the soldier will remain on the field if the player wins.

As the name of the ship suggests, the Dreadnought was a massive airship. Its size was immense enough to completely dwarf Cid's airship, as evidenced by the cutscene where Cid's airship was being pursued. It also had three propellers at the top to give it flight, with a massive tower at the center for the main propellers, as well as two propellers on the wings. Unlike Cid's airship, which was primarily made of wood, the dreadnought was heavily armored. It had a main deck as well as at least four lower decks, with the lowest deck containing the engine room.

The dreadnought's armament is never actually showcased, although the cutscene where it pursued Cid's airship suggests that it at the very least contained four massive twin-barrel turrets on its starboard side, and the cutscene depicting its launch had at least one turret tower on the starboard and the port each. In addition, it was mentioned to have enough firepower to significantly damage Poft, Altair, Gatrea, and Paloom before needing to refuel. During its pursuit of Cid's airship, it also had in its underbelly a hatch that unveiled a giant crane that was used to grip Cid's airship and presumably capture it, although it does have difficulty against smaller airships, as evidenced by its missing once when trying to grab it.

The Dreadnought was built by the enslaved people of Bafsk under the supervision of the Dark Knight. It had been developed in large part as a response to the heavy Imperial casualties during the Fall of Fynn. Production was later taken over by Borghen, when the Dark Knight was supposedly called away. Firion and the party arrive in Bafsk and try to destroy the Dreadnought before it is completed. They are too late, and the airship takes off and lays waste to Poft, Altair, Gatrea, and Paloom.

Firion has returned to Altair together with Gordon, when he learns that Hilda has been captured by the Dreadnought. It falls to Firion to pursue the ship and rescue the princess! 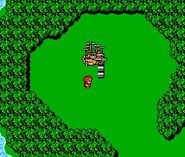 The Dreadnought on the World Map. (NES).

Dreadnought on the World Map (PS).

Dreadnought on the World Map (GBA).

Destruction of the Dreadnought.

The Dreadnought in its first cutscene (PSP).

[view · edit · purge]Dreadnoughts were a type of battleship popular in the first half of the 20th century before the advent of the aircraft carrier made them obsolete. They were gigantic heavily armored ships noted for an "all-big-gun" design that allowed for great firing range while being well-protected. The term "dreadnought" comes from the first major ship of this design, the 1906 HMS Dreadnought. The word means "fear nothing".