Draw (ドロー, Dorō?) is a command ability in Final Fantasy VIII available when a Guardian Force is junctioned to a character. Every Guardian Force has Draw as a default ability, though it can be removed via Amnesia Greens, and later re-added using the Draw Scroll bought from pet shops.

When a character draws magic from enemies, aquamarine spheres eject out of the enemy into the drawing party member. In the game's PlayStation demo, the draw animation is longer, with the spells gathering up in the air for a moment before entering the character.[1] The draw system was created by Takatsugu Nakazawa.

Draw is used to siphon magic from enemies. If magic is drawn it can either be stocked or cast.

Draw is used to steal Guardian Forces from certain bosses, such as Eden from Ultima Weapon. If the GF is drawn from the boss, it is useless in that particular battle, but afterwards can be junctioned.

How many of a spell can be drawn depends on the drawing character's Magic stat, the spell they are drawing, and whom they are drawing it from. Thus, high-level spells, like Holy and Meteor, are often only drawn in stocks of three or fewer. Draws can also fail entirely. Characters with high Magic have a better chance of drawing stronger spells, but no more than nine spells can be drawn at a time (in the PlayStation Final Fantasy VIII demo the maximum is only three spells). This, does not apply to magic drawn from the field draw points, where the player character can draw up to fifteen of a given spell.

Lefty and the final bosses can draw magic from the player party and use the spells against them.

Stock is the option to draw magic and place the spells into the character's spell inventory. Each character has a magic spell inventory that can store 32 spells, each up to 100 units. Whenever the player chooses to stock the magic, it is saved in the inventory for later use with the Magic command or for junctioning or refining. When a character has drawn 100 units of a spell, the Stock command is disabled. The character uses Stock automatically when drawing spells from draw points.

The formula for determining how many spells a character will draw (referred to as DrawAmount in the following formula) is as follows:

Stocking magic from enemies and draw points 100 times in the Steam/Remastered versions earns the player achievements.

Cast is the option to draw a magic spell from the enemy and immediately cast it, without it being taken out of the player's spell inventory. If the player chooses to cast when they draw, the magic will be weaker than it would have been if the player had stocked it and used it with the Magic command (in case of status-inducing magic, they will wear out faster).

The formula to determine how much damage is dealt through casting instead of using the spell from the character is as follows:

(The following is the formula for Magic, which is used in step 2 of the formula)

Each spell has a resist value to being drawn, with higher numbers meaning harder to draw.

The formula for drawing spells is as follows:

The DrawResist value varies per spell, as shown below.[2]

See draw point article for a list of draw points.

Squall has the ability to Draw as his unique EX skill. He gains status buffs depending on the enemy class he draws from. Drawing from Vanguards grant him HP regen, Assassins increase his speed, Marksmen grant him Bravery regen, and Specialists randomize what buff he draws and junctions.

Draw & Junction is an ability used by Squall when he appears as a boss. Which spell he draws and junctions is based on a set pattern, rather than being based on the type of opponent he draws from.

Draw & Junction also appears as the first command for Squall's second Burst Soul Break, Steely Blade. It deals two hits of physical ice and non-elemental damage, each only dealing 40% of the damage of a normal attack, with a 1.65 second cast time. Despite this weakness, it is essential to use Draw & Junction to maximize the performance of Squall's second command, Löwen Roar, which deals more damage, performs more hits, and has a higher critical hit chance the more Draw & Junction has been used, with maximum potential at four Draw & Junctions. 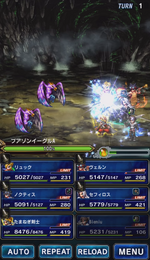