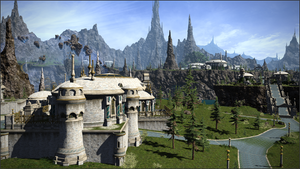 The Dravanian Hinterlands is a location in Final Fantasy XIV: Heavensward.

The Dravanian Hinterland lies far to the west of Coerthas and north of Vylbrand. This area is where Sharlayan built a colony, and was counted as among the city-states of Eorzea. The city was eventually evacuated in response to the Garlean invasion of Eorzea, and has since been occupied by goblins and treasure hunters.

A zone connection to the Dravanian Forelands lies in the east. Once flight attunement is acquired, a shortcut to the Coerthas Western Highlands can also be found in the southeastern hills. A settlement called Idyllshire can be found by the Cenotaph in the north of the zone.

There are no aetherytes in this zone. Players will have to teleport to Idyllshire instead.

Dravania's climate may exhibit any of the following weather conditions:

This facility was re-appropriated by the Illuminati as their base of operations.

A wildlife and botanical refuge kept by the Sharlayans. The presence of trees and roots growing out of the structure suggests its occupants have flourished unchecked.

A secret cave inhabited by the only resident of Sharlayan to refuse participation in the exodus: Matoya.

The knowledge of Sharlayan was left behind in this building to the south, most of its contents still intact.

A steampunk citadel in the middle of the Tipped Ewer, encased by an arcane barrier. The Illuminati have summoned a primal within the hulk, causing it to gradually rise from the waters.

The daytime theme for the Dravanian Hinterlands is Missing Pages, while the nighttime theme is The Silent Regard of Stars.

Sharlayan streets.
Add a photo to this gallery

This section about a location in Final Fantasy XIV is empty or needs to be expanded. You can help the Final Fantasy Wiki by expanding it.
Final Fantasy XIV setting
Retrieved from "https://finalfantasy.fandom.com/wiki/Dravanian_Hinterlands?oldid=3353689"
Community content is available under CC-BY-SA unless otherwise noted.