The Draklor Laboratory. In Archades. The Empire's weapons research begins and ends there.

Draklor Laboratory is an unrevisitable location in Final Fantasy XII. It is situated in Archades, the capital city of the Archadian Empire, and is among the tallest buildings there.

Weapons research laboratory located a short distance from the administrative district in the northeast of Archades, sponsored by the Archadian Imperial Army, with Dr. Cidolfus Demen Bunansa as its head researcher and maker of policy. Research is divided among airship design projects, sundry weapons projects, and magickal endeavors. In recent years, particular attention has been paid to magicite research, with great strides being made in the manufacturing of magicite and improved methods of drawing energy from the stones. A strict security system is in place to ensure that none of the knowledge in Draklor Laboratory leaves its doors without authorization.

In the original PlayStation 2 version, the treasures in Draklor Laboratories appear in pairs, with one treasure with 100% spawn rate, and the other with 70% spawn rate. They most often contain different types of Motes, even with the Diamond Armlet equipped. In the room in the northeastern corner of the Floor 66 the 70% chance treasure can give a Power Vest, and the 100% chance treasure can give a gambit for a foe weak against Wind. In the Floor 67, in the southwestern corner of the area, the treasures can contain a Doom Mace (70% treasure) and gambit for a foe weak against the Dark (100%). In the 70th Floor there is a single treasure with 70% spawn rate that can contain the Pheasant Netsuke.

These chests only appear in the Zodiac versions. This is the room where Cid is fought. As such, the player must grab the chest during the battle as they can never return to the location after.

The head researcher at Draklor is Dr. Cid, who has become obsessed with nethicite and spends all of his time researching its properties and how to integrate it into weapons for the empire. He conspires with Vayne Carudas Solidor to conquer all of Ivalice, and thus Vayne orchestrates for Archadia to invade the smaller nations on the Empire's border to obtain their shards of deifacted nethicite, heirlooms of Dynast King Raithwall so Cid can study their properties at the Draklor Laboratory. After meeting the rogue Occuria Venat at Giruvegan the two team up and Venat teaches Cid how to manufacture manmade nethicite. Behind Emperor Gramis Gana Solidor's back, Vayne enters a deal with Halim Ondore IV of Bhujerba for the local Lhusu Mines to provide the Draklor Laboratories with magicite for study.

Ashe, after obtaining the Sword of Kings, plans to use it to destroy the Empire's nethicite in the laboratory and infiltrates the Draklor Laboratory with the help of Balthier's "friend", Jules. Once inside, the party discovers someone else has also infiltrated the building. The intruder shows himself when the party reaches the upper floors leading to Dr. Cid's room, and is revealed to be the sky pirate Reddas. Reddas assists the party when they confront Dr. Cid but Cid escapes with the nethicite, saying he is heading to Giruvegan. Reddas helps the others escape on his airship and takes them to the Balfonheim Port.

When the party first arrives, there are no enemies. It is not until after the party arrives and obtains the map that an alarm is triggered, calling various enemy soldiers and the occasional mastiff to defend the lab. The party reaches the top floor by using switches to remotely open and close different doors, where they fight Cid. Once Dr. Cid is defeated, the party can no longer return.

The map is received automatically on floor 67 in Dr. Cid's office. There is no 69th Floor. 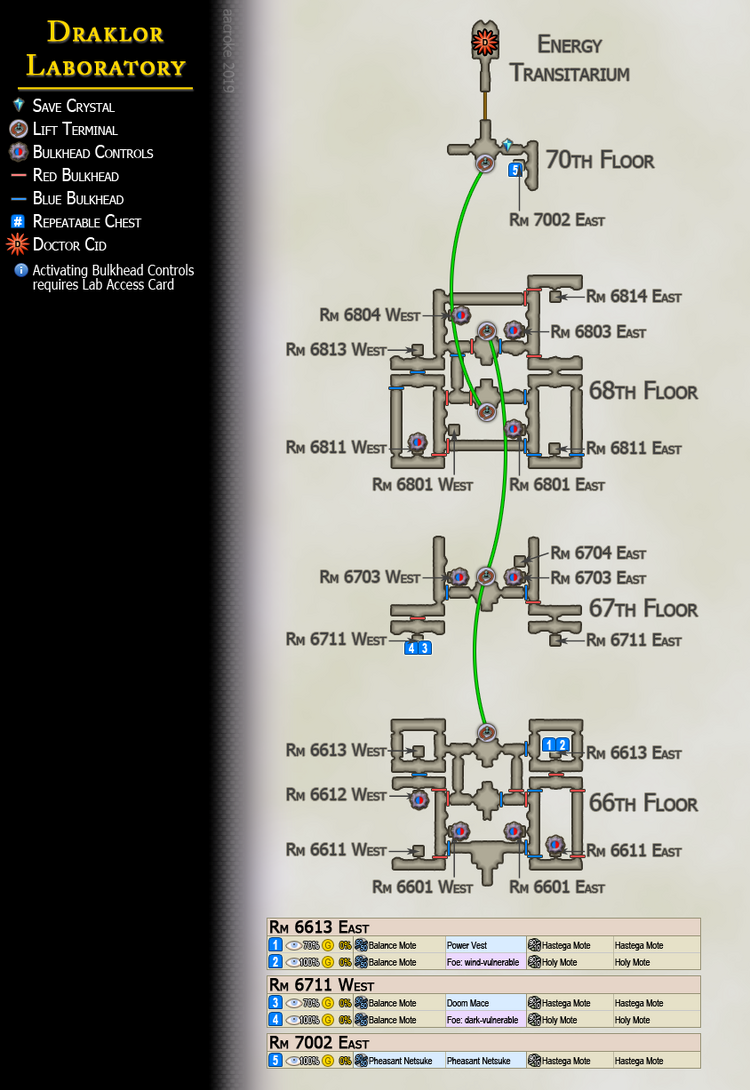 Artwork of Vayne and Larsa with Draklor Laboratory behind them. 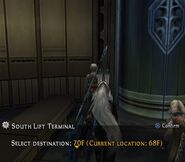 The word Draklor may come from two words: "dark" with changed letter order and "lore" which is other word for "wisdom". This makes the Laboratory's full name "Laboratory of Dark Wisdom" which is correct as in the laboratory, Dr. Cid is researching various weapons of war, and the information about the research done there is not public.