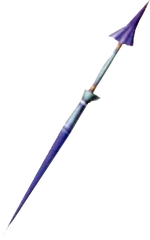 A spear representing an oath made in another world. Legend has it that there was once an overlord and an ancient dragon who overcame their racial boundaries to bond together in friendship.

Dragoon Lance is the starting weapon for Kain when he becomes a Holy Dragoon, exclusively wielded by him. It provides 80 Attack, 40% Accuracy, is Holy-elemental, and boosts all stats by +3.

Modeled after the lance of an ancient dragon-hunting hero, this weapon is built for inflicting massive damage.

Dragoon Lance is a spear for Fang. It has the trait Stifled Magic and synthesized ability Magic Wall. It is a first tier weapon starting at level 1 with minimal physical Attack of 39. It takes 38,040 EXP to level up to the max level 21 with 179 Physical when maxed out. It can be upgraded into the Dragonhorn with a Uraninite. When maxed, Dragoon Lance dismantles into Sturdy Bone x7 and a Cobaltite. Dragoon Lance can be bought at Gilgamesh Inc for 230,000 gil.

The Dragoon Lance is one of Kain's unlockable weapons. It can be obtained either by random chance when redeeming a Treasure token, or by purchasing them from the Shop for 7,200 Gil. Like all other characters' weapons, having it equipped carries no advantages or disadvantages.

A spear made using dragon scales that came from the faraway world of Eos. Those who use it are granted resistance against fire, ice, lightning, and other elemental attacks.

Dragoon Lance is a Spear obtained during the Nier Automata event, Destroy the Machine Lifeform. It provides 55 ATK and +10% damage for Jump attacks.

Dragoon Lance (FFXV) is a Spear obtained during the Final Fantasy XV event, Fodina Caestino. It provides 109 ATK and +20% resistance to Fire, Ice, and Lightning.

A spear used by dragon riders.

The Dragoon Lance appears as a spear within the Forsaken Dungeon. It provides 54 Weapon Atk, 10 Durability, +5 Speed, and -3 Consumption Rate. 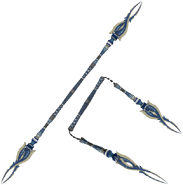 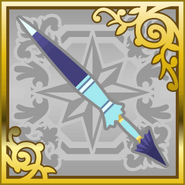 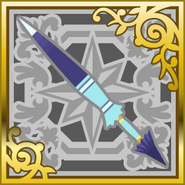 Dragoon is a recurring job from the Final Fantasy that wields spears and is often related to dragons. [view · edit · purge]"Dragoon" is the traditional name for a special soldier type in classical European warfare. Unlike in Final Fantasy, the original dragoons did not fight with lances, that being the job of "lancers"—a different soldier class. Dragoons were infantry that rode on horseback, but fought on foot. Originally they fought with a hand-held blunderbuss called the "dragon", giving them the name. The dragoons' arsenal expanded to include guns, sabres, and axes. During the Napoleonic Wars they became medium cavalry and reached the height of their popularity.