Dragon knights who specialize in jumping and lance attacks.

The Dragoon is a job in Final Fantasy V obtained after the Earth Crystal shatters. It is a heavy armor physical fighter job focused around the ability to equip spears and use them for the Jump command, allowing them to momentarily stay out of harm's way before dealing heavy damage. This can be an effective move in a variety of fights.

Dragoon is one of few jobs that can equip spears, which can be especially effective against certain enemies. Beyond Jump and spears, Dragoons learn Lance, which slightly drains HP and MP from a target. This ability has a few uses, but is not the main prize of the job. Dragoon takes relatively little AP to master, meaning it can be used to gain quick stat boosts.

Mastering the job on the entire party earns the player the "Wind Rider" achievement in the now defunct mobile and Steam versions.

The Dragoon, like the Knight, wears heavy armor. The main difference is the dragon-shaped helmet and the dragon-like wings on their backs; Bartz's sprite resembles Kain Highwind's from Final Fantasy IV. Lenna and Krile forgo helmets, but wear dragon's wing-shaped hair accessories, instead. Faris stands out as wearing a red suit of armor, rather than blue or purple like the others.

Dragoons boast decent Strength, affecting their physical damage, and Stamina, affecting their HP. They have a small Agility boost, relating to their turn rate, and a small Magic penalty (though this can be alleviated by equipping a magic skillset in their ability slot, if needed).

Upon mastery, Freelancers and Mimes gain the Dragoon's base Strength, Agility and Stamina unless they already have a higher base from another mastered job.

Spears deal damage based on Strength, and deal double damage with the Jump command. The ultimate spear in most versions is Dragon Lance, stolen from certain enemies. It always deals a critical hit unto dragon-type enemies. The Game Boy Advance port adds the superior Longinus, found in the new post-game bonus dungeon, Sealed Temple.

The Dragoon's job command is Jump, which has the character leap up on their turn, then come falling down on the enemy on their next turn. If the character is equipped with a spear, Twin Lance, Man-Eater, Staff of Light, or Judgment Staff, they will do double the damage, and thus not lose any damage potential for attacking once per two turns. Jump ignores row, will not activate any special abilities or effects of any equipped weapons, and critical hits (including those that consume MP to force a critical) will act as normal. Spellblade effects will apply to Jump attacks, and rods may still miss even with Jump. Weapons that deal no damage and are based on Magic, such as harps, the Healing Staff, and the Wonder Wand, will always miss. Jump is unblockable.

The Dragoon's other ability is Lance. Using Lance takes around half of the MP of what normal Osmose spells take, and a small amount of HP compared to the Drain spell, but has no chance of missing.[note 2] 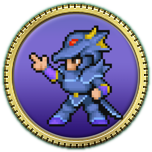