Dragoons are polearm experts. Their Jump ability allows them to deal massive damage while being impervious to enemy attacks.

The bearer of this certificate has tamed the very skies and is deemed worthy of the title of Master Dragoon.

The Dragoon is a job class in Final Fantasy III. It is gained from the Water Crystal. Dragoons wield spears in battle and are highly skilled against aerial foes. They are renowned for their ability to launch deadly attacks from above.

This is the first time Jump appears in the series, and it functions exactly the same as in subsequent games. By jumping into the air, the Dragoon avoids all attacks, and comes back down on the enemy a turn later, doing twice as much damage.

Additionally, when a Dragoon uses Jump against a dragon-type enemy, the damage is higher than usual.

In this version, Jump is the same. However, the damage multiplier is dependent on the job level, with damage ranging from 1.5x damage to 2.4x damage using the following formula:

Which give the following results:

Additionally, if an enemy is weak against Wind, damage is further doubled. 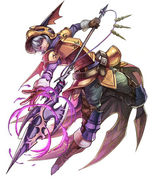 The Onion Dragoon appeared as a water-elemental Eidolon in the original free-to-play version. The summon's design is directly based on the Dragoon job's appearance in the 3D remake of Final Fantasy III. Its final artwork depicts the Onion Dragoon wielding the Gae Bolg from Final Fantasy XIV.

Released during the game's time as Final Fantasy Legends: Toki no Suishō, the Onion Dragoon signet allowed the user to perform Geirskogul I-III abilities and had the Dragon Dive summon attack. The signet could be equipped by all party members and was an SS+ signet.

Like other cameo signets, the Onion Dragoon was removed from the premium release. Its Geirskogul abilities were transferred to the third Sandy signet. 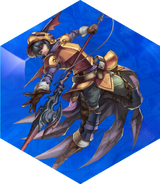 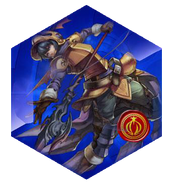 Arc appears as a Dragoon in the version available via Final Fantasy Portal App.

Arc as a Dragoon.

Refia as a Dragoon.