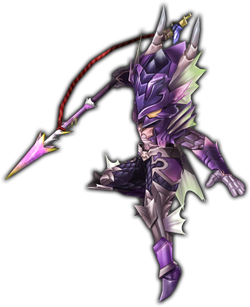 The greatest asset of dragoons is their Jump attack, leaping high in the air before plummeting down on enemies with incredible speed.

Dragoon (竜騎士, Ryūkishi?) is one of the jobs available in Final Fantasy Explorers.

It is unlocked in the 4★ Quest, "Aptitude Exam: Dragoon & Sage". It can be mastered by completing any 10 quests, then the 5★ quest "Mastery Trials: Dragoon".

The Dragoon is a high-damage somewhat tank-like class. They can initially equip spears and clubs; after mastery dual axes, dual clubs and dual swords can be equipped.

They are proficient in all Spear Skills.

The unique ability Jump allows the Dragoon to avoid damage for a short time, then land near an enemy for damage. Jump does more damage near the center of impact. The standard ability Lancet absorbs HP and additional AP with normal attacks. Dragoons absorb 10% of the damage given as HP and AP.