Dragoon's Pride (プライド・オブ・ザ・ドラグーン, Puraido obu za Doragūn?, lit. Pride of the Dragoon or プライドオブドラグーン, Puraido obu Doragūn?, lit. Pride of Dragoon), also known as Dragoon's Glory, is a recurring ability in the Final Fantasy series. It is Kain Highwind's Limit Break. Kain leaps high into the sky, his spear pointing upward, where when he is in front of two moons he performs several spins, and dives at his enemy, his spear pointing downward.

Dragoon's Pride is Kain's EX Burst. Kain leaps into the air at high speeds and descends to deliver a powerful single blow to the opponent. The player must trap button commands as they appear on-screen to fill up a power gauge in order to maximize the Bravery damage done.

Dragoon's Pride is an exclusive reactive ability that costs 18 CP to equip. It is activated in Battle Music Sequences (BMS) when a boss-class enemy appears. It deals damage in direct proportion to Strength, Agility, and level. It is learned by Kain (level 40).

Dragoon's Pride is a Burst Soul Break for Kain with 2.50 seconds charge time. It deals four lightning and non-elemental physical attacks to all enemies at the damage potency of 125% of a conventional attack, totaling for 500% damage potency. It bestows Haste, Attach Lightning, and Burst Mode to the user. Mastering Dragoon's Glory raises Kain's Attack by 10 points.

In the global release, Dragoon's Pride was initially known as "Dragoon's Glory". After receiving player feedback the name was changed to "Dragoon's Pride" due to the ability known under that name in the English-speaking communities.

Dragoon's Pride is also Kain's Hero Ability, being a six hit lightning and dark-elemental jump attack with a long delay.

Kain's card depicting his Dissidia 012 Final Fantasy artwork can use Dragoon's Pride as an ability. For the cost of 4 Lightning CP, the discard of another Kain card, and dulling Kain, Dragoon's Pride breaks a forward of the player's choosing. As a downside, Kain does not become active the turn after using Dragoon's Pride. 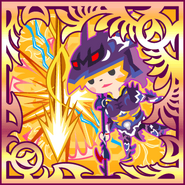 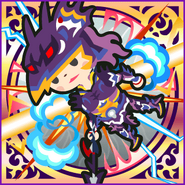 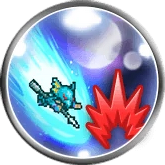 This gallery is incomplete and requires Theatrhythm Final Fantasy Curtain Call added. You can help the Final Fantasy Wiki by uploading images.

Dragoon is a recurring job in the Final Fantasy series that wields spears and is often related to dragons. [view · edit · purge]"Dragoon" is the traditional name for a special soldier type in classical European warfare. Unlike in Final Fantasy, the original dragoons did not fight with lances, that being the job of "lancers"—a different soldier class. Dragoons were infantry that rode on horseback, but fought on foot. Originally they fought with a hand-held blunderbuss called the "dragon", giving them the name. The dragoons' arsenal expanded to include guns, sabres, and axes. During the Napoleonic Wars they became medium cavalry and reached the height of their popularity.