The Dragons' Den is a bonus dungeon in Final Fantasy VI in the Game Boy Advance and 2014 iOS/Android/Steam versions, located just north of the Dragon's Neck Coliseum on an island with a single tree. It can be accessed after defeating the eight legendary dragons and gaining the Stone Tablet.

The Dragons' Den houses reincarnations of the eight legendary dragons that are stronger than before, with higher stats, better attacks, and they all have a new "gimmick" to the fight to increase their challenge level: the Ice Dragon mimics the Vector Lythos and attacks in a group of four, while the Gold Dragon has the Runic status to absorb magic, and so forth. As the party defeats the reborn eight dragons, seals around the dungeon linked to the dragons shatter, unlocking new areas. When all eight are defeated, the party can access the deepest chamber of the dungeon and face the "leader" of the eight dragons, Kaiser Dragon.

In addition to the eight dragons, the dungeon also contains powerful ultimate weapons for the party members and powerful equipment pieces in general. The dungeon also houses a variety of monsters, including many new and exclusive to Dragons' Den.

The den requires three parties to traverse, which lets the player exploit the save point glitch. The save areas have sparkling, star-like lights that allow the player to change party members between the three parties if all three are brought to the same room. Also, unlike Kefka's Tower and the Phoenix Cave, this means that while the den requires three parties to open paths for each other, all areas are accessible by all parties, and the player can face all eight dragons with the same party, if they know the den well enough to navigate it properly.

Several areas are sealed off with magical barriers linked to one of the eight legendary dragons. Defeating a dragon shatters the corresponding seals, and to access the den's deepest areas, all dragons must fall.

The entrance is named Dragons' Den in-game. The location resembles a cliff with two main cave entrances. There is also an escape route back to the airship through the crane hook device.

The Earth Labyrinth is the first area of the dungeon. It is interconnected with several passageways to the Burning Labyrinth.

The Shrine of Serenity is a small save room area where party members can be changed. It connects to the Earth Labyrinth and has no random encounters.

The Burning Labyrinth is a lava cave and the lair of the Storm Dragon. It contains several switches that create rocks above the lava that the other parties can use to jump across it, similar to the Phoenix Cave. Reaching the Storm Dragon in the center of the cave requires two parties to hold down switches so that the third party can reach the dragon.

The Flame Labyrinth is a cave area and the lair of the Red Dragon. It is first entered through the Earth Labyrinth. The upper door is locked until a switch is operated in the Dragon Temple. The cave contains two switches operating the rocks leading to the other exits. The right one leads to the Grand Cavern and the central one is blocked until the Seal of Water is broken and leads to the Inner Eye Labyrinth. There is also a hidden chest in the southwest corner of the cave and a hidden passage to another chest in the northwest part of the cave.

To proceed, the party has to push a 4-ton weight over a switch, similar to Kefka's Tower. Then two parties can operate the remaining switches that control rocks through the lower and upper levels of the cave. There are also two hidden chests on the lower left and lower right corners and a hidden switch near the lava that opens a pathway inside the Holy Temple.

Enemies shown in italics do not appear at the beginning of battles, but are nonetheless coded into the enemy formations.

The Dragon Temple is a central area that connects to the Earth Labyrinth and hosts a turtle that can be used to cross a pond. After breaking the Seal of Lightning, the turtle can be used to reach the Grand Cavern. A skull switch after the turtle opens a door to the Red Dragon's chamber in the Flame Labyrinth.

The upper central path is blocked by the Blue Dragon and contains a save point and an exit to Kaiser's Breath blocked by the Seal of Lightning after the dragon. To use the exit, the door has to be opened from the right side by another party.

The passage to the upper-left is blocked by the Seal of Fire and contains a gravestone which hints about the location of the Inner Eye Labyrinth lava switch: "If ye would face a drake divine, search ye between the molten pools within the Inner Eye".

The upper right passage contains another gravestone with an inscription puzzle similar to the Darill's Tomb. The inscriptions FDRA INGO THEK GONS can be found from the rightmost passage blocked by the Seal of Heaven. After the inscriptions, there is the chamber of the Gold Dragon. Carving THEK INGO FDRA GONS, "The King of Dragons", on the gravestone grants access to the Cloister part of the Dragon Temple.

The Cloister part of the Dragon temple contains several stairs and doorways to the Treasure Room. One of the doorways has to be entered by operating a switch with another party.

The Treasure Room contains several treasure chests and teleporters connecting different parts of the area. The connections are marked with colored dots on the map image below. There are three chests that contain powerful monster-in-a-box bosses.

The Grand Cavern is a mountainous region. It has several tight passages and bridges guarded by mysterious figures in green similar to Zone Eater's Belly. The player must leap between the bridges while avoiding the figures or else be knocked down to the Cloister of Trials.

The left exit connects to the Inner Eye Labyrinth. Next to the exit is the Shrine of Repose. A Seal of Water blocks the entrance to the Flame Labyrinth down left and a Seal of Fire blocks the right exit to the Dragon Temple. Upwards, a Seal of Lightning blocks the way to Kaiser's Breath.

The Skull Dragon awaits at the top of the Grand Cavern and defeating it breaks the Seal of Darkness in the Inner Eye Labyrinth, revealing a staircase that allows the party to go around the green men.

The Cloister of Trials is the landing place if the party falls from the Grand Cavern. It has powerful random encounters and five bosses marked with blue flames. The only exit is the dim light on the right side of the map leading back to the lower part of the Grand Cavern.

The bosses walk randomly in the area and the party can try to avoid them. Defeating the bosses removes the blue flames, but they will respawn should the party fall to the Cloister again.

In a repeat of Kefka's Tower, Kaiser's Breath has three switches used for the final puzzle where two of the switches have to be pushed simultaneously by different parties. Upon doing so, the last switch becomes a teleporter, allowing the third party to reach the last area of the dungeon: Kaiser's Lair.

Kaiser's Lair is the final area and hosts the final boss enemies. Random encounters are disabled and, on the first trek, Kaiser Dragon awaits next to flames. After completing the dungeon, returning to the lair reveals Omega Weapon in its place. The save point tile after the boss teleports the party back to the airship.

Enemies shown in italics do not appear at the beginning of battles, but are nonetheless coded into the enemy formations.

Any of the three parties can reach Kaiser - when the other two stand on their switches, the third switch becomes a teleporter to Kaiser's Lair.

When Kaiser Dragon is defeated, the party receives the Diabolos magicite. Touching the save point tile triggers a congratulations message from Kappa with an introduction to Soul Shrine, and the player is returned to the airship. Completing the Dragons' Den earns the Master of Dragons achievement in the mobile/PC versions.

This quest is a somewhat separate part of the Dragons' Den and can be done once the Seal of Heaven is broken and the inscription puzzle is solved. Two parties are needed to reach the end and three monster-in-a-box enemies (Plague, Neslug and Flan Princess) are encountered along the way.

Returning to Kaiser's Lair reveals Omega Weapon whose defeat earns the Congratulations! achievement in the mobile/PC versions. Since the seals have been broken, the player only has to solve the final puzzle to reach Omega Weapon.

Note - due to the size and complexity of Dragons' Den, some entrances/exits in the map below are represented by a different icon, but otherwise are normal entrances/exits with nothing special about them. 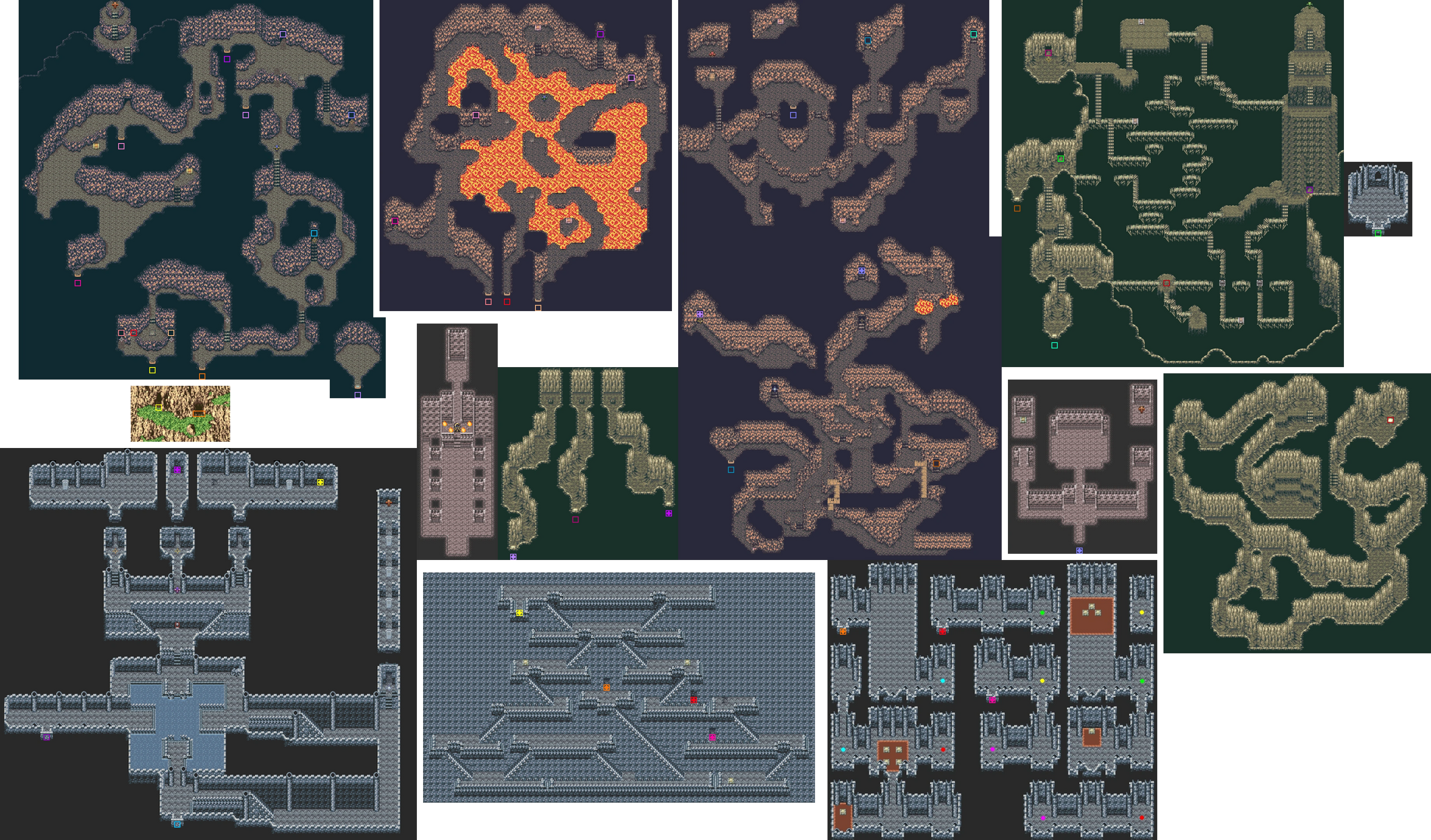 "Phantom Forest" is the track used as the background theme for most areas of the Dragons' Den.

The last puzzle to open the way to Kaiser Dragon's lair (iOS/Android/PC).

Kaiser Dragon's lair in the heart of the Dragons' Den (2014 mobile/Steam).

Kaiser Dragon's lair in the heart of the Dragons' Den (GBA).