Human in appearance, but descended of dragons. The blood of the Holy Dragon flows in her veins.

Dragonkin, also known as Dragoner, is a special job from Final Fantasy Tactics. Reis's default job, the Dragonkin is about taming dragons and using dragon powers to aid allies in battle. It costs 3,350 JP to master.

Dragonkin job command. Only usable by those with dragonblood in their veins.

The damage formula for Holy Breath is as follows:

The damage formula for all other attacks are as follows:

The Dragonkin is a magick-based special job capable of dealing high elemental damage, as well buffing the party and enabling monster allies. Unique to the Dragonkin is the ability to boost the performance of other dragon units in the party, as well taming dragon-type enemies. It has the highest HP, MP, and Magick growth among all jobs, as well as an excellent attack stat that surpasses even that of the Sword Saint's. Reis is the only playable Dragonkin (should the player recruit her).

The Dragonkin can also be used as a physical damage dealer, since it has access to innate Dual Wield; the player can equip the Monk's Barehanded to further boost its unarmed damage, or the Knight's Equip Swords. Much like other jobs, the Dragonkin can become virtually unkillable with the Shirahadori reaction ability from Samurai, although this won't protect it from magickal attacks.

The Dragonkin's powerful abilities and impressive stat growth come at a price: it can equip only female-exclusive equipment. It also has low mobility, which can be augmented by equipping it with movement abilities such as its own Move +1, Thief's Move +2, or even Teleport. 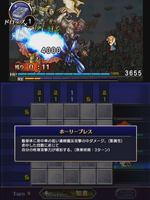 [view · edit · purge]"-Kin" is a suffix which denotes close relation to the root word by characteristics and/or ancestry.