Final Fantasy Wiki
Register
Don't have an account?
Sign In
Advertisement
in: Locations in World of Final Fantasy, Mountains

The Dragon Scars is a dungeon located in the Babil Region of Grymoire in World of Final Fantasy, accessible from The Rainbow Shore. It is first visited in Chapter 10, "Too Warm a Welcome".

Contains a Gate near the dungeon's exit back out to The Rainbow Shore in the south.

A Red Dragon sitting atop its nest can be found here, guarding a treasure chest.

A secret area, there are no random encounters here. At the end of this area is a Cerberus, which must be defeated for the Fluffiflower required to vanquish the Gimme Golem.

Contains a Save Crystal at the top of the area. The player fights Mega Red Dragon here during Chapter 10.

Traversing all the way east leads to the Babil Region. There are no random encounters in this area. 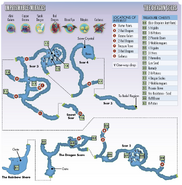 In Scar 3, the Treasure Trove can be found in the dragon's nest in the dead-end going north. Requires defeating the Red Dragon first to access it.

The following tips pop up on the screen when exploring the dungeon for the first time.

Unlike other secret areas, this is a required area to advance the storyline.

"Labyrinth of Dragons" is the background theme that plays in The Dragon Scars.

The Dragon Scars serves as the setting for several Intervention Quests:

Freak of Nature and

A Clash of Swords. Areas of this dungeon are used in bonus dungeons: Scar 4 appears as the second area in EX Dungeon C, while Scar 1 is used as the first floor of the "Wind route" in the Maxima version exclusive Hidden Dungeon. In the Maxima version, the Secret Scar is used for the unmarked location that houses the Thunder Seal, on the same continent as The Dragon Scars.

What could it be?

Nibelheim in the distance

In British English, a "scar" is a precipitous, rocky place; cliff.