A scale found on the corpse of a vyraal. Natural philosophers studying wyrms and their kin are known to pay well for such.

The Dragon Scale (龍の鱗 or 龍のウロコ or 竜のウロコ or 竜のうろこ, Ryū no Uroko?), also known as Dragon Fin, is a recurring, single-use item in the Final Fantasy series that frequently is used to cause some form of Water damage to one or more targets.

Water damage on all opponents

Deals water damage to an enemy.

Dragon Scales are a crafting material obtained from high-level dragons. It is used in creation of Dragon's Mail.

The Dragon Scale is a key item obtained by giving the Viera Rucksack to the Viera Wayfarer after defeating Vyraal. The Wyrm Philosopher on the Cerobi Steppe Windmill #10 will trade the Dragon Scale for the Age Worn Key that will open the Hall of the Wroth God located in the Sochen Cave Palace, where the Hell Wyrm awaits.

The Dragon Scale are used to create Draconic equipment and can only be won from the Dragon.

A scale from the body of a dragon. Could be used to temper armor.

Dragon Scale is a material that can only be dropped from the Dragon.

Dragons are known for their incredibly long lifespans when compared to humans. Many aspects of dragon life are still not well understood, but one behavior that has been observed is the creature's molting routine. As their bodies grow, dragons slough off their skin, scales and all. The residuum of this process is an extraordinary amount of skin and—of greater interest to the adventurer—huge piles of hardy dragon scales. It would surely vex any dragon to learn the value of its discarded leavings: anyone who happens upon them shall never want for gold. 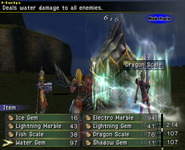