Dragon Quest , published as Dragon Warrior in North America until 2005, is a series of internationally best-selling console roleplaying video game titles originally published by Enix, now Square Enix. The first title was published in 1986; there are currently eleven main-series titles and numerous spin-off games. The series has had a significant impact on the development of console RPGs, and introduced a number of features to the genre. The basic premise of most Dragon Quest titles is to play a Hero who, usually with a group of party members, is out to save the land from peril at the hands of an evil enemy. Common elements persist throughout the series and its spinoff titles: turn-based combat; recurring monsters, including the Slime, which has become the series mascot; until recently, a text-based menu system; and, until recently, random encounters.

From Dragon Quest to Final Fantasy[]

In some versions of the game, Erdrick's tomb can be seen in Elfheim. 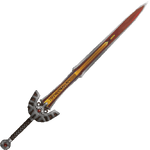 Among the swords collected by the interdimensional traveler Gilgamesh, is a replica of Erdrick's Sword, here called the Wyrmhero Blade. It is called Tolo's Sword in the Japanese version, a pun on Erdrick's Japanese name Loto. The player can get the Wyrmhero Blade by selling the Omega Badge, Godslayer's Badge and Lu Shang's Badge to the bazaar.

The Final Fantasy XII demo disc was also a pack-in item with the original print of Dragon Quest VIII.

Brickman, the famous Golem monster from the Dragon Quest series, appeared in a cross-game collaboration event for Dragon Quest X. The players obtained a Thug's Mug headgear and a Wind-up Brickman minion for clearing the event. Its description says it has arrived from another realm.

As part of the mid-October 2020 collaboration with Dragon Quest of the Stars, Dragon Quest monster stickers were made available in the DP exchange.

The game pays homage to Dragon Quest in various ways:

The game has featured a collab event with the Dragon Quest Monsters Super Light mobile game, which introduced summonable units based on the Dragonlord, slime, golem, Orochi, killer machine, Robbin' 'ood and liquid metal slime monsters. This event was only available in the Japanese version.

A later series of events was launched in the Global release to commemorate other Dragon Quest titles, such as Dragon Quest XI: Echoes of an Elusive Age. Monsters that were previously limited to the Japanese release were brought forward for each event in this series.

In the Dragon Quest collaboration, the Prince of Midenhall's outfit and Erdrick's armor serve as wearable costumes for Wol. Varying enemies and characters from the series also appear within the collaboration's event quests.

From Final Fantasy to Dragon Quest[]

Dragon Quest's tension system, introduced with this game, bears elements of both the Monk's Focus ability and the Limit Break systems of later Final Fantasy titles: any character can use "Psyche Up" to raise his/her tension up to three times successfully, and possibly a fourth and final time with a chance it may not succeed. Doing so temporarily builds up the stats applied to any one battle action following the buildup sequence. If the final attempt succeeds, the character will be wrapped in a pink aura and may transform; the Hero notoriously goes Super Saiyan when fully tensed (an homage to series artist Akira Toriyama's other creation, Dragon Ball). Tension is released with the next battle command, resulting in an enhanced attack or spell on that turn. Tension can be rebuilt as many times as needed.

The ninth installment adds the Coup de Grace system, another Limit-like ability where, under specific conditions, a character will ready himself/herself to perform a powerful unique ability according to his/her current vocation. Though the tension system returns, its use is limited to specific vocations, such as the Martial Artist.

In a crossover event between Dragon Quest X and Final Fantasy, Square Enix added Shantotto from Final Fantasy XI to the online multiplayer RPG Dragon Quest X. A chocobo and a moogle appeared as part of this event, as well as a Cactuar and a Mandragora as fightable monsters. A Cactuar pose and equipment was also added.[1]

The story of this game features a hero with remarkable parallels to a Warrior of Light. It also infers a dualism thrown off-kilter before the story begins, a prominent theme in early Final Fantasy stories. While there are callbacks aplenty to prior Dragon Quest games, the world of Erdrea also takes cues from Final Fantasy VI with the main story being split into two distinct arcs based on balance versus ruin.

The tension and coup-de-grace systems have been replaced by a pep system. Under certain conditions, party members will enter a "pepped up" state and be wrapped in a blue aura, raising specific stats for a set number of turns. When two or more party members have been pepped up, they can unleash a combined skill known as a Pep Power, which executes in a similar fashion to the Limit Break system. The internal mechanics appear parallel to those in Final Fantasy VIII since hidden variables trigger the pepped-up states.

The character development system also bears similarities to the revised mechanics of Final Fantasy XII, as each party member can invest earned skill points into unique webs of abilities; the player advances the system by activating adjoining nodes in each web.

Because of its open-world nature, save points include mechanics similar to the camp system in Final Fantasy XV. While camped, the party can rest, perform services at a church, forge items, and buy goods.

Cid appears in the Dragon Quest series for the first time ever as the inventor Ducktor Cid (a platypunk, one of the recurring monsters). Additionally, there is a Slime character called the "Crystal Chronicler", a reference to Final Fantasy Crystal Chronicles.

Dragon Quest of the Stars[]

A collaboration with Dissidia Final Fantasy Opera Omnia was launched in mid-October 2020. The event featured Warrior of Light, Garland, Kefka, Cloud, Sephiroth, Jecht and Y'shtola manikins; the Planesgorger; and the Blackened Will as bosses.

Due to the unforeseen impact of the ongoing COVID-19 crisis on Square Enix's Singapore unit, the company chose to withdraw the Global version on June 30, 2021. Hence, the collaboration was never re-issued.

The first game from the Fortune Street series marks the first officially overt crossover between the Final Fantasy and Dragon Quest series.

Four Heroes of Dragon Quest make an appearance in Ultimate via downloadable content under the moniker, "Hero". The character defaults as the Luminary from Dragon Quest XI, but features the Heroes of III, IV, and VIII as alternate costumes.

The cast of Itadaki Street Portable.

Tifa, a Slime, and Maribel from Dragon Quest VII.

Gilgamesh, Squall, and the three heroes of Dragon Quest II. 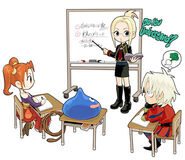 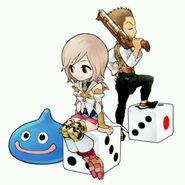 Ashe, Balthier, and a Slime.