A striking weapon in the form of a dragon's talons.

The Dragon Claws (ドラゴンクロー, Doragon Kurō?), also known as Dragon Claw or Dragon's Claws, is a recurring Knuckles in the series. It is generally a high-ranked weapon that either is Holy-elemental or deals extra damage when attacking dragons with it.

The Dragon Claws is Josef's ultimate weapon in the PSP version, providing 65 attack, 99% accuracy, 2% evasion, -5 Intelligence and Soul, and +30 Strength and Agility. Only one can be obtained in the Arcane Labyrinth.

The Dragon Claws is the second-strongest weapon in the 2D remakes, bested by the Godhand, and can only be equipped by Yang. It provides 90 accuracy, +10 Strength and Spirit, and deals extra damage when attacking dragons. Only one can be obtained, found at the Lunar Ruins.

The Dragon Claws is the second-strongest claw that provides 50% accuracy, +10 Strength and Spirit, deals extra damage against dragons, and are Holy-elemental. It can be equipped only by Yang, Ursula, and Edge, and is obtained by defeating Tiamat.

The Dragon Claws is a weapon for Sabin that provides 188 attack, +2 Strength, +1 Magic, and is Holy-elemental. It can be obtained from Darill's Tomb. Betting the Dragon Claws in the Dragon's Neck Coliseum will pit the player against a Test Rider, and if they win they will receive a Sniper.

Weapon made from a dragon's claw.

The Dragon's Claws is a mid-ranked weapon for Amarant, which provides 53 attack, is Water-elemental, and teaches No Mercy and Counter. Only one can be obtained, found at the Forgotten Lagoon from Chocograph 7 during the Chocobo Hot and Cold minigame.

Dragon Claws is a hand-to-hand weapon that provides +13 damage, +66 Delay: +66, and +5 Fire resistance. It also deals additional Fire damage. It deals +2.86 damage per second and accumulates +4 TP per hit. It can be equipped by level 68 Monk. It is only obtainable through synthesis.

The Dragon Claw is the strongest claw, obtained from Tristan at Spencer's Place. It has 80 base power, while its attack power is anywhere between 87.5~192.5, while also granting +5 Magic and having a chance to inflict Poison, Paralyze, Sleep, Confuse, Blind, Petrify, and Silence when successfully inflicting damage with it.

The high amount of status ailments that it can inflict make it useful against regular enemies. Outside of battle, it can be used as a grappling hook.

Except for all harder materials, dragon claws are the hardest material known.

Dragon Claws grants +5 to Attack. It can be equipped by Monk, Tifa, Red XIII, Snow, and Chocobo.

Claws that deal extra damage to dragons and bolster elemental resistance to repel their breath.

From long ago, dragons were seen as a symbol of strength and intelligence, but at the same time, they were often hunted for the valuable parts they hold, such as their fangs, eyes, horns, heart, and more. This weapon made using dragon claws are very hard to come by because of the difficulty in obtaining a dragon's claw without it being damaged in the hunt for dragons.

Dragon Claws is a Fist weapon bought for 100 Star Quartz from Mama Chocobo at Georl. It provides 82 ATK and is Water-elemental, and only one may be obtained.

As sharp as a dragon's claws.

The Dragon Claw appears as a 2-handed knuckle within the Forsaken Dungeon. It provides 67 Weapon Atk, 4 Durability, +4 Speed, and -3 Consumption Rate. 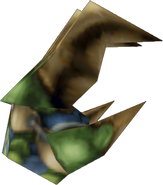 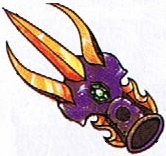 Benjamin extending the Dragon Claw on the field. 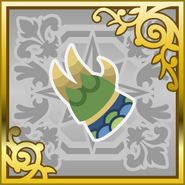 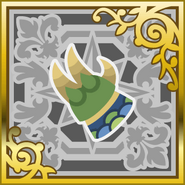 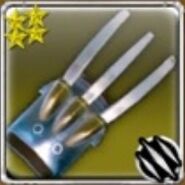