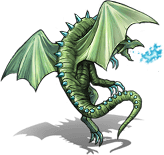 Dragon Aevis (ドラゴンエイビス, Doragon Eibisu?) is a recurring enemy in the series. They first appeared in Final Fantasy V.

Dragon Aevis appears as an enemy in the Interdimensional Rift. They can use the Breath Wing ability to deal wind damage to all party members. They are an Aevis-type enemy, so extra damage can be dealt to them by party members who are equipped with bows. The Artemis Bow can be stolen from them, which is one of the strongest bows in the game.

Dragon Aevis appears as an enemy in the Dragons' Den. It is highly resistant to fire attacks and can counter magic attacks with Cyclonic, which reduces the health of all party members to 1/16 of their current total.

Dragon Aevis appears as a dragon/plate wyrm-type enemy. A group of three is found in the Ward of Velitation area of the Stilshrine of Miriam. They can use the ability Bile to inflict Sap on a party member. They also have the passive ability Low-HP Mag+, which increases their magic potency and their status infliction chances when their health is low.

Dragon Aevis are members of the aevis family found inside the Stone Vigil. They are among the more dangerous enemies in the dungeon, with wide patrol areas and unavoidable area of effect attacks.

This gallery is incomplete and requires Pictlogica Final Fantasy [FFVI] added. You can help the Final Fantasy Wiki by uploading images.