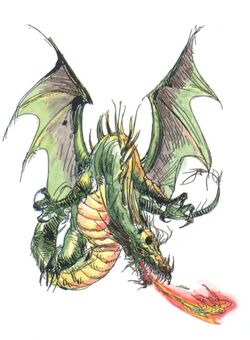 Dragons (ドラゴン, Doragon? or 龍, りゅう, Ryū?) are a recurring enemy in the Final Fantasy series. Naturally, they take the typical appearance of a dragon—large bodies, wings and claws, etc.

Otherwise, their appearances vary, some are serpentine, some are quadrupedal, and some are a little of both. They often appear in harder dungeons and are usually among the stronger enemies of the series. There are also several variations with different elemental properties. Dragon enemies often serve as bosses and attack with breath and claws. They also often overlap with dinosaur-type enemies.

Many well-known recurring bosses and enemies, including Bahamut, Shinryu, and Tiamat are dragon-type enemies. 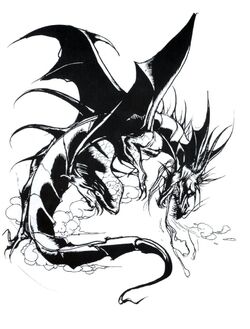 Most of the Dragons appear as random encounters. A number of Dragons are fought as mini-bosses at the Whisperwind Cove in the Dawn of Souls version. The Two-Headed Dragon is a boss fought at the Earthgift Shrine. Shinryu is an optional superboss in the GBA and PSP versions. 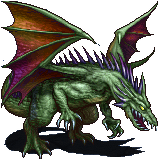 Tiamat also appears as a boss from Pandaemonium. The Black Dragon, a boss in the GBA, PSP, and iPhone versions, can be fought at the Unknown Palace, as another dragon, Yamatano Orochi, who is a palette swap of Tiamat.

In addition, The Sea Dragon is an enemy fought in Leviathan and fought in the ocean after obtaining Ultima. 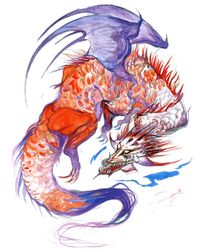 There are several Dragons and most appear as rare random encounters in some of the last dungeons of the game. Bahamut, Nepto Dragon, and the Two Headed Dragon appear as bosses, but the player cannot run only from the second battle with Bahamut and the battle with the Two-Headed Dragon. Also, all the high-rank Dragons found at the Crystal Tower have a small chance of dropping a piece of onion equipment, the best in the game. They are, though, the strongest random encounters.

The Advance version also brought more bosses to the list, such as the Storm Dragon from the Cave of Trials and the Brachioraidos, the Lunar Dragon and Lunar Bahamut from the Lunar Ruins. Of all these, only Bahamut, Leviathan and Mist Dragon appear as Eidolons.

The eight legendary dragons are:

Many more dragons appear, palette-swaps of the eight legendary dragons: 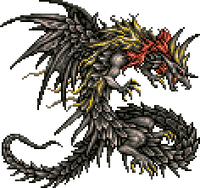 The Dragon is a random encounter and can be fought at Mt. Nibel. It is also encountered at Mt. Nibel in the flashback with Sephiroth. It is implied that the Dragon in the flashback with Sephiroth was the result of the Nibelheim Mako Reactor malfunctioning, due to Sephiroth, immediately prior to the battle, stating "That would be our Monster..." while briefing the SOLDIERS about their mission at Nibelheim.

Other dragons appear mostly in dungeons: 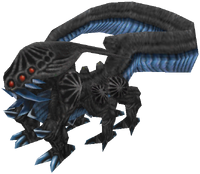 Three very different races of dragon appear as random encounters. One is Blue Dragon, which can be fought in the Trabia Snowfield. Another dragon is the Ruby Dragon; which is fought in one of the dream sequences taking place at Trabia Canyon and various places in Esthar. It must also be fought in the Deep Sea Research Center every time the player answers Bahamut.

The third dragon is the Hexadragon, which can be fought at the Great Salt Lake. All of these dragons can be fought in Ultimecia Castle, as well as the Island Closest To Hell.

Additional dragons include the recurring Bahamut, an obtainable Guardian Force, must be fought at the Deep Sea Research Center. A boss in Ultimecia Castle, the Tiamat, is a palette swap of Bahamut and even uses "Dark Flare", as opposed to Bahamut's "Mega Flare". 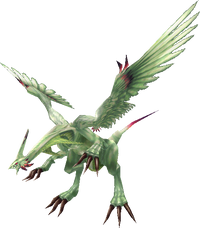 Early concept art of a dragon talking with a boy.

A dragon clawing at an adventurer.

Dragons and people eating dinner together.

The fiends called Drakes are the dragon race. Each Drake carries Power Spheres and a type of Hourglass.

The International and HD remaster versions allow the player to fight the Dark Aeon, Dark Bahamut which can be fought at the Zanarkand Dome.

A new type of fiend added are classified as 'Dragon', while Drakes still exist.

Only three variants of Dragon exist:

It takes six kills to Oversoul a Dragon-type fiend.

It takes 18 kills to Oversoul a Drake-type fiend. 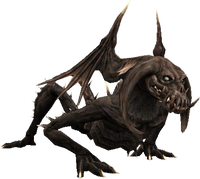 Dragons are both a type of monsters opposed to the Demon-type, as well as a monster family within that type. The Dragon-type also includes Hydras, Puks, Wyrms, and Wyverns, including the Dragoon's pet Wyvern. Amphipteres, while technically members of the the Bird family, are described as demonic dragons.

Dragons are a Genus of enemies that fall within the Dragoon's Monograph.

Within that genus are four classes of dragons: 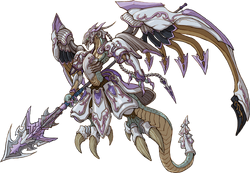 Two distinct genres of Dragon appear. The Wyrm species are quadrupeds and attack by single bursts of elemental flames. The Drake species stand on two legs and are much more dangerous due to their arcing breath attack.

There are also three dragon Espers:

At least one dragon was set to appear.

Faeryl (Marduk in the Japanese version) is the only representation of a dragon and part of the Feral Creature subtype, Wrathwyrm. Although the game implies that there are a lot of faeryls, only one appears as a boss on Archylte Steppe in the Year Unknown.

Zaltys is the red dragon which serves as the first boss. It is weak against ice-elemental damage. Green dragons under the name of 'Zomok' appear to inhabit Luxerion.

Aeronite, a red variation of Faeryl, appears as a superboss inhabiting the Dead Dunes. In the field, it appears as a sphere of black mist striking lightning from within.

The Dragons are a race of beings descended from Midgardsormr and his seven progeny, the great wyrms or First Brood. Despite their appearance, classified as scaleskin by most Eorzean naturalists, dragons possess sapience as some are able to speak the Eorzean tongue while other prefer to speak in their natural language while projecting their thoughts into others. Furthermore, dragons are immortal, with those of the First Brood being hard to kill unless their eyes, the source of their power, have been completely destroyed. Because of their immortality, they do not see time the same way as mortals do and consider the acts of one's ancestors to that person's deed as well. There are two known havens that dragons took residence in: Dravania and Meracydia, the latter having been decimated by the Allagan Empire. Most dragons in Eorzea are part of the Dravanian Horde, a league of dragons that answer to the great wyrm Nidhogg in his millenial feud with the Holy See of Ishgard.

Dragons are a manifestation of the Azure Dragon Crystal kept by the Kingdom of Concordia. The Crystal bestows the Power of the Dragon, allowing its people to communicate and interact with monsters peacefully. Those who can speak with dragons are said to be in-tune with the Will of the Crystals. The largest dragon is Soryu, said to be a manifestation of the Azure Dragon itself.

Dragons appear as flying enemies recruited by the Kingdom of Concordia and fight alongside their warriors.

Dragons are huge reptilian creatures that rank among the sturdiest monsters. The advanced Dragons can utilize elemental attacks through their breath. The Blue Dragon absorbs Ice, and is weak against Fire. For the Red Dragon, it is the opposite of the Blue Dragon where it absorbs Fire and is weak to Ice. There is also the Holy Dragon and Dark Dragon. Reis Duelar and Celebrant Bremondt Freitberg can also transform into Dragons.

Three species of Drake appear, and all of them may teach a specific Blue Magic spell:

The Drake species includes a large number of dragon-type enemies. It is notable that none of these are capable of flight. Drakes have two abilities: Breath, which deals damage, and Wyrmcraft, which harnesses the elements into buffs or debuffs.

Dragon is the name for entire class of enemies which include Lizardmen and Wyverns. The vast majority of enemies in this class are some variations of the basic Dragon. There is also a dummy enemy that gives weapon affinity to Dragons.

There are eight different forms of Dragon:

The only enemy which is of dragon descent is the Dragon Zombie. An undead boss in Conall Curach, the easiest way to defeat it is by using Holy.

Dragon is a boss fought alongside Dragon Riders. They are fought on Sinner's Isle in single player and the Kilanda Islands on multiplayer. Dragon can also be fought in the Lunite temple as a story mode exclusive.

The Dragon from Ring of Fates makes an appearance as a bonus boss.

The Dragon is an enemy found inside the Temple of Mana. The dragon's head is the only vulnerable spot, reachable only from below or from the side. The Red Dragon is an upgrade version, found in the same dungeon.

Dragons are a monster type found. The family consists of five "numbered" dragons ("Dragon 1" through "Dragon 5") as well as Tiamat. They are the highest ranked family, requiring the player to eat Dragon or meat of the Four Fiends to become a Dragon. Due to an error in the code, it is impossible for the player to become a Dragon 2 in the original Game Boy release.

The Fiend Sei-Ryu is a Dragon, as is his brother, O-Ryu, who spends the game disguised as a human. Both brothers carry special Orbs that, combined, make the Blue Sphere.

The Dragon is an enemy and also a possible monster that the party's monster unit(s) can transform into.

Dragons appears as enemies, and the four main characters can transform into these dragons when the specific requirement has been achieve. Transformed characters are the exact copy of these dragons, right down to their stats and skills. 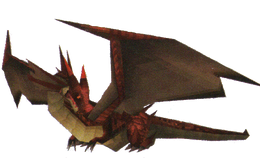 In addition, the party uses a Dragon as their mode of aerial transportation.

A vert-scaled wyrm whose very breath is poison and promises a death horrible to behold. The green dragon lusts ever for silver and gold, even while knowing that its poison will corrupt those precious metals...

The Green Dragon from Final Fantasy II makes an appearance as an enemy. 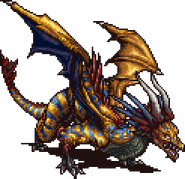 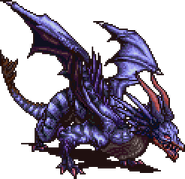 This gallery is incomplete and requires [FFIII/VI/VII] added. You can help the Final Fantasy Wiki by uploading images.

Various dragons from the series appear as bosses and enemies. 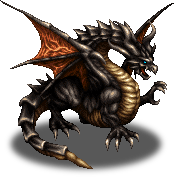 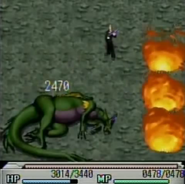 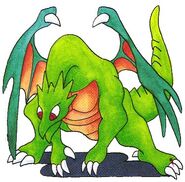 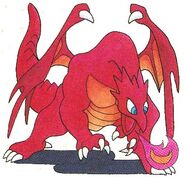 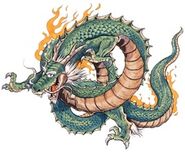