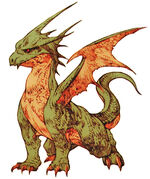 A giant monster covered in scales. Although it has wings, it cannot fly. It is very aggressive and not very intelligent.

Dragons (ドラゴン, Doragon?) in Final Fantasy Tactics are huge reptilian creatures that rank among the sturdiest monsters. Their shriveled wings prevent them from becoming airborne, but they have a pretty good movement speed. The advanced Dragons can perform elemental attacks through their breath. The Blue Dragon absorbs Ice, and is weak against Fire. The Red Dragon is the opposite and absorbs Fire and is weak to Ice. There is also the Holy Dragon and Dark Dragon.

Basic green Dragons have none of the ranged breath attacks that their higher brethren do, but are still quite powerful physically.

Blue Dragons know the Ice Breath skill, and have an elemental affinity for Ice.

Red Dragons have quite a large sum of HP. They know the Thunder Breath skill, and have an elemental affinity for Fire.

The damage formula for Charge is as follows:

The damage formula for Tail Sweep is as follows:

The formula for magick damage is as follows: