Dragon is an enemy from Final Fantasy VII fought in a scripted battle during a flashback, in the area of Mt. Nibel where Materia Keeper resides, and in the final round of the Battle Square during the time Tiny Bronco is available. When fought in the Battle Square its stats are enhanced with double the regular HP and its Attack and Magic Attack are increased by 25%.

Dragon is the strongest random enemy on Mt. Nibel, and could be considered something of a mini-boss with its powerful attacks and high HP. They are not immune to poisoning, which can be useful considering their high HP. A Gold Armlet can be stolen from it, and it has a 75% chance of using its Flame Thrower ability, which can be learned as an Enemy Skill. Dragon Fang also has a high critical rate, able to cause over 700 damage on characters in the front row.

The Dragon gives plenty of gil, EXP, and AP when beaten.

An easy way to defeat this opponent is to use L4 Suicide.

Sephiroth fighting during a scripted battle. 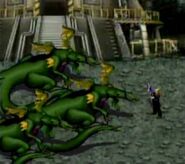 Multiple Dragons are encountered by the Turks in the area surrounding Nibelheim's Mako Reactor.