Dragon is Freya's skillset in Final Fantasy IX. Although they consume MP, the Dragon skills are not considered magic, and thus can be used when magic-use is blocked, such as when the party enters the anti-magic field within Oeilvert in the Forgotten Continent. Like most of the abilities in Final Fantasy IX, Dragon skills are learned by equipping equipment pieces that teach them.

In Final Fantasy Trading Card Game, one of Freya's cards can use Cherry Blossom, and another can use Dragon Crest. For two Lightning CP, the discard of a Freya card and Dulling Freya, Cherry Blossom deals 2000 damage to the opponent for each card the player controls with Dragoon as their name or job. Dragon Crest requires the discard of a Freya card and a Lightning CP, allows the player to choose a Forward and deal it 3000 damage for each Dragoon in their Break zone. 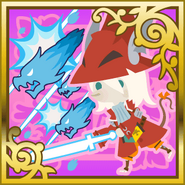 [view · edit · purge]A dragon is a legendary creature, typically with serpentine or reptilian traits, which is featured in the myths of many cultures. The command is named as such because Freya is a Dragon Knight.