Dragon's Peak is a location from Final Fantasy III found just to the east of Canaan. Bahamut is first encountered here, but is impossible to defeat at this stage. Once the Warriors of the Light rescue Desch from becoming the meal of Bahamut's offspring, and themselves in the process via jumping off Bahamut's nest, the Warriors cannot revisit the mountain again if they return to the Dragon's Peak via ship or airship in the NES version; in the 3D and Pixel Remaster versions, the mountain can be revisited, but Bahamut's nest is no longer reachable. It is recommended that the player farm the Rust Bird for Phoenix Downs before leaving.

From the town of Canaan, the Warriors of the Light head to the Dragon's Peak to look for Desch, a man who possesses the Mini spell and broke Salina's heart. On their way to the summit, they are abducted by Bahamut, who plans to feed its spawn with them. At the dragon's nest, they meet Desch, who gives the heroes the Mini spell and flees from Bahamut alongside them, and joins them on their quest later.

"To the Mountain Top"

The background music that plays in the Dragon's Peak is called "To the Mountain Top". 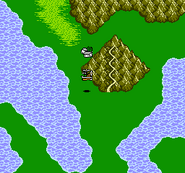 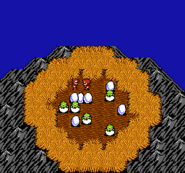