Many obtained through betting

Many fought depending on bet

All right! It's time to put my skills to the ultimate test!

In the SNES and PlayStation releases the location is named "Colosseum". The Game Boy Advance and subsequent releases, however, spell all instances of the name as "Coliseum".

Winning ten times in the mobile/Steam version earns the Gateway to the Top achievement.

In the World of Balance, the coliseum had yet to exist. The owner decided to build a coliseum, because he believes people are at their best when they are at war.

A year after the end of the world, the coliseum has been completed, with the owner pleased with Kefka for creating a world full of war. Due to his ongoing debts, Ultros was forced to act as the coliseum's receptionist by Siegfried, who also took residence within the newly built arena. At some point the lone surviving Imperial soldier inside the coliseum ran into Locke Cole and was told to pass on a message to his allies.

If Shadow survived the end of the world and was rescued from the Cave on the Veldt, he decides to leave from Thamasa shortly after the party had exit Strago's home and took up fighting in the coliseum. When the party had bet the Ichigeki in the coliseum, Shadow battles his old companions in a duel. After the match, Shadow decided to rejoin the remaining Returners in the battle against Kefka

The player can fight in the coliseum at will. When the player chooses to fight, they must wager an item. They will see their opponent and the item they have wagered, and must choose a party member to do battle. The coliseum fights are one-on-one, and the player's character is AI-controlled and will use any command and spell they know. Nothing stops them from using acquired moves which injure or even kill themselves, such as Self-Destruct or Soul Spiral.

Monsters at the coliseum will not use their regular AI scripts; they instead use the abilities in Relm's Control options for that monster. The Control option has a maximum of four abilities, and one of the abilities will be picked at random when their turn comes up.

The following battle commands are disabled within the coliseum battles: Items, Revert, Throw, Control, Slot, Leap, Defend, and Possess (even though the latter is not available at this point of the game by any normal means).

The coliseum removes KO, Invisible, Petrify, and Zombie statuses before a match, but not Imp, Float, or Poison, and restores HP and MP to their max before the match begins. There is no need to heal those statuses or restore HP/MP to prepare for the match, except if a status prevents the player from properly equipping a character.

If all party members are killed in the coliseum, the player can walk around with a party of dead people until they encounter a battle outside of the coliseum that turns into an instant Game Over.

There are several good pieces of equipment to equip on the fighter. The Paladin's Shield negates/absorbs all elemental damage, and has the highest evasion of any shield. It can be obtained the easiest by fighting on the Solitary Island to dispel the Cursed Shield. Master's Scroll is another good choice, found in the Ancient Castle. Other good ones include the Merit Award and Miracle Shoes (both can be won in the coliseum), Ribbon, and Safety Bit/Memento Ring, depending on the situation. Weapons vary from character to character, but the Lightbringer paired with Merit Award is an excellent combo. Many coliseum opponents are vulnerable to Death attacks, which can be used through some weaponry.

Shadow is a good character to fight with at the coliseum, as he will never use Throw during a coliseum match, and having him without any magic learned at this point is possible, since he temporarily joined the party only twice after they acquired magicite in the World of Balance: once on their way to Thamasa, and once on the Floating Continent. He has weaponry that can inflict instant death, such as Assassin's Dagger or Ichigeki, which has a 25% chance to kill an enemy in a single blow, but the player should not use these weapons when fighting an undead opponent. An alternate weapon is the Kagenui, that can randomly cast Stop on the attacked target. Shadow has 28% evasion, having the highest raw evasion out of the party, and being the second speediest character (tied with Gau). When evading an attack, there is a chance of Interceptor attacking the enemy without losing a turn, but this attack will miss floating opponents.

Setzer is another good choice, as he never uses his Slot command, but there is a good chance the player will have Setzer with more magic spells compared to Shadow, due to him having spent more time in the party. The Viper Darts can kill an enemy in one blow, much like some of Shadow's weaponry, with a 25% chance.

Gogo is another good choice, as the player can prepare them for any situation. The player can equip Gogo with nothing but Attack along with the Master's Scroll and Merit Award combo (only in versions prior to the GBA version), or whith three Tools commands, where the player sells all tools except for the Drill, giving Gogo a 3/4 chance of using Drill. Six out of the eight tools can be bought back in Figaro Castle, Chainsaw can be stolen from Duel Armor, and Air Anchor from Gamma; both of these enemies are found in Kefka's Tower.

Umaro is another choice, who has 1/2 chance of either using Attack (four times in a row if equipped with Master's Scroll) or Tackle (a single unblockable attack that ignores defense) during battle. He is limited in the equipment department, being unable to equip any pieces of armor, leaving only the two relic slots to play with. Umaro can benefit from the Gauntlet relic, since he only holds a single Bone Club in his right hand and nothing in his left hand, making the Gauntlet and Master's Scroll a good combo. Umaro comes down to luck compared to the other characters mentioned above if Shadow and/or Setzer have no magic spells, and depends on who his opponent is. However, his raw strength can finish a battle quicker than most.

Another alternative is to have Gogo as an Imp, fully equipped with the Imp equipment that comes with high Defense, Magic Defense, and Water absorption. Imp characters' special command is disabled, but they can still access the Magic command, meaning they may waste turns trying to cast spells that will fail and abort. The only available spell that will not abort is the Imp spell, and for this reason, Gogo is the obvious option. Since they will only use the Attack command every turn, this makes the Master's Scroll and Genji Glove a deadly combo.

The remaining characters are poor choices, since they likely have more spells/abilities compared to the characters mentioned above, making them more of a gamble. Nevertheless, a player can use a soft reset and reenter the coliseum if the character of their choosing has lost the match.

If a wager does not appear in the following list, then typically the fight is with Typhon, and the reward is an Elixir. Typhon's first action is almost always Snort, which ejects the player from the battle without costing them their wager. If the player's character is fast and strong enough to defeat Typhon before being ejected, they will lose their wager and win the reward (in this case, an Elixir), as with the other battles. Typically, Typhon appears whenever the player bets a common or worthless item, which includes most (but not all) store-bought equipment pieces and items.

If Shadow has survived the Floating Continent and has been rescued from the Cave on the Veldt, betting the Ichigeki will result in a fight against Shadow, with the Ichigeki as the reward, after which Shadow will rejoin the party. Otherwise, betting Ichigeki will have the default Typhon/Elixir result.

In the Advance, 2014 mobile/Steam versions, betting Excalipoor will result in a fight with Onion Dasher, followed by a fight between Gilgamesh and the current party under the player's active control, with a Merit Award and the Gilgamesh esper as the reward.

The list is also available as a series of flowcharts that shows the paths of chains of consecutive bets, and their destinations.

"Johnny C. Bad" is the background theme that plays at the Dragon's Neck Coliseum. The name is likely a reference to "Johnny B. Goode", a 1958 rock and roll song written and originally performed by Chuck Berry.

The Dragon's Neck Coliseum appears as the arena where the players can fight Ultros and Typhon.

The Dragon's Neck Coliseum was the final dungeon in the Challenge Event, Assassin in Black. One battle with Siegfried was contained therein, and his defeat on the Classic track for the first time earned the player Shadow's Hero Record. 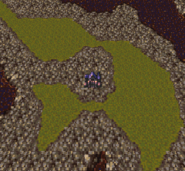 The Coliseum on the World Map (SNES). 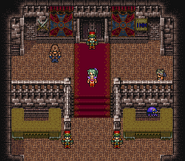 Inside the Coliseum (SNES). 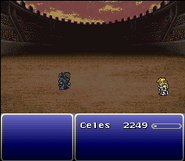 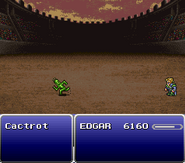 The Coliseum on the World Map (GBA).

Inside the Dragon's Neck Coliseum (GBA).

The Coliseum on the World of Ruin map (2014 mobile/Steam).