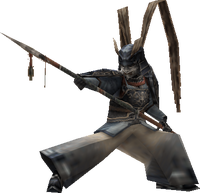 Dracoknight (蒼龍兵, Sōryū Hei?, lit. Soryu Soldier) is an enemy family in Final Fantasy Type-0. It has three different variants, each of which is a different enemy.

Concordia's main forces are divided into three classes: second and third class are equivalent to privates, while the first class equates to what other nations refer to as "noncoms." The dracoknights are also rather prideful warriors. Although they possess the power to manipulate monsters, they prefer to vanquish foes by the blades of their own spears. They are nimble and athletic, deftly dodging opponents' attacks and countering with swift stabs at close range.