Dracobaltian
Dracobaltian is a race of people in Orience in Final Fantasy Type-0. They are the former citizens of the Kingdom of Dracobaltia who lost their sanity. Having been turned into ferocious monsters, the Dracobaltians were sealed away from the rest of the realm.

Dracobaltians have humanoid faces without eyes, perhaps as a result of having lived in dark caverns for so long the need to sense sunlight was no longer needed. They move on all-fours with lizard-like legs complete with claws. They have a spotted leathery skin and some matted hair on their heads. They have scaly skin and fins like a lizard or a fish. They have claw-like hands and feet. Dracobaltians don't wear clothes, but adorn themselves with ornate and colorful jewelry. They are of similar stature to humans, but hunch over and tend to crawl on all fours.

Dracobaltians retain little of their formerly sentient selves. They are characterized by an insatiable bloodlust driven by hunger, deranged insanity, and attack anyone on sight. Having been cursed by their alleged blasphemy to the Crystal, Dracobaltians are similar to the fate of a l'Cie who defies the Will of their Crystal: a Cie'th.

Three l'Cie of the Azure Dragon sealed away these citizens of the lost Kingdom of Dracobaltia for idolatry. These accursed worshippers of the Blue Dragon Crystal currently live out their days in the Cursemire of Naraku, awaiting the day when someone might release them from their prison and allow them to exact revenge on those who spurned them...

In combat, the Dracobaltians are vicious people. They rush toward opponents at high velocity, chomping at the bit to take a bite out of their target's flesh. Dracobaltians also produce a special kind of acid they use to poison their victims before gnawing them to bits. One can only hope these violent fiends remain exiled to the cursemire for all eternity.

The territory of the Azure Dragon was originally known as Blue Dragon. Contact with the Blue Dragon Crystal and its l'Cie had instilled the ability to command beasts in the otherwise unremarkable people of Rilochy, who became known as Dracobaltians. The Dracobaltians enshrined the Crystal and built their culture around it with monsters as their loyal servants. The temple became the heart of society and the custom of rendering offerings to the Crystalkeeper centralized authority so that in the year 197 the Crystalkeeper declared himself king of what became known as the Kingdom of Dracobaltia.

The Dracobaltians were the original, male, avaricious kin to rule Dracobaltia, home to the Blue Dragon Crystal. The monsters stood no chance against the forces of the Dominion of Rubrum during the war in 252 RG. The defeat made them desperate and thus they turned to the Blue Dragon Crystal to bless them with a greater power. The Crystal granted them power to manipulate creatures more formidable than monsters: the wyvern.

With their hunger still not sated, Dracobaltians commenced a war over the fate of all four Crystals. Seeing the wyverns, despite their intelligence, as mere monsters, their masters didn't hesitate to serve their dragons as provisions and produce in times of food shortage.

This struggle between the fellow children of the Blue Dragon initiated a drastic decline in the Crystal's power, and the balance between the four Crystals of Orience began to falter. As by a miracle, the Azure Dragon Crystal appeared to overthrow its corresponding followers, wasting no time and designating Azure Dragon l'Cie to create the Cursemire of Naraku, where the Dracobaltians were judged to be sealed away for eternity for their blasphemy and idolatry. Through the joint forces of the l'Cie Argenia, Caelan and Lazuline, the Dracobaltian were banished to rot in eternity, abolishing the Kingdom of Dracobaltia and the Blue Dragon Crystal from Orience.

This event became known in legend as the story of the male progenitors of the Blue Dragon people having consumed the flesh of dragons cursing the male descendants who became monsters. The female descendants, unaffected by the curse, are said to have taken over the country in the year 252 under the name Azure Dragon and made Concordia into a matriarchy.

Concordia was reigned over by queens until the year 842 when the King of Concordia came into power after Queen Andoria was assassinated. As the Battle of Judecca against the dominion seems lost, the king orders the Naraku unsealed and the release of the Dracobaltians in hope they would assist them. However, the Dracobaltians—now mere monsters themselves—have only one goal: to soothe the pain brought upon them by the curse, giving them their characteristic behavior of still eating dragon flesh and crying for help. The Dracobaltians fail to turn the tide as they turn against Rubrum and Concordia equally.

Dracobaltians are fought as enemies in select missions. 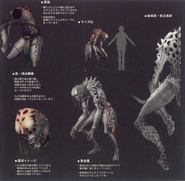 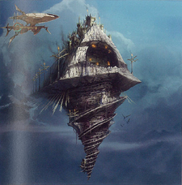 According to the Rubicus, for idolatry toward the Blue Dragon Crystal and blasphemy upon the consumption of dragons, being the manifestations of its power and benevolent blessings, the Dracobaltians were sentenced to live in the Cursemire of Naraku by three l'Cie. Naraku is the Japanese equivalent of Naraka (Sanskrit: नरक) or Hell in Buddhist mythology, and said to be one of the six realms of the cycle of Samsara.

Further highlighting the allusions are the grotesque and demonic appearances of the Dracobaltians, as being born into this existence is said to be the worst of the Four Unhappy/Cursed Births of Buddhism; one born into this realm are said to exist as preta, a being forever cursed with insatiable hunger, frail bodies, and ill health to suffer unimaginable pain, while pitted against the many punishments and horrific designs one's own karma has reaped upon them for this world to exhaust before their passing.