Judge Drace is a minor character in Final Fantasy XII. She is the only female Judge Magister, the highest rank possible in the Archadian Empire's military, who serves as a mentor to the young Lord Larsa.

Drace has shoulder-length brown hair and brown eyes. Like the other Judge Magisters, she wears a suit of full plate mail with a long black cape, the symbol of the Empire on the back in red. Unique design features of her armor include large curved plates around her hips and thighs, and a helmet with orb protrusions. She wields a dual-headed club with a longer, larger head on one end, both themed in an enigmatic arthropod-like design, sporting the apparent preserved and possibly reinforced bodies of insect-based monsters with some limbs and anatomy jutting out metal blades. As with the other Judges' weapons, it can separate into two halves and be wielded as two individual weapons. In Final Fantasy Brave Exvius, the shorter weapon is known as Death Trap.

Drace is the only Archadian Judge open with her distrust of Vayne due to his ruthless pursuit of power and past crimes. Of the five Judges, she is closest to Gabranth, while Bergan, Ghis, and Zargabaath are uncomfortable with her open suspicions of Vayne. By contrast, she prefers the younger Larsa, pleased with his growth and his active role in trying to avert war with the Resistance and Rozarria.

In the manga adaptation, Drace was involved in the battle of Nalbina Fortress and fought against Basch face to face, commending his unique swordsmanship and commenting his swordsmanship "is different", hinting to Gabranth, though Basch does not understand her. When it is revealed the attack was a ruse to keep Dalmasca's reinforcements away from the Nalbina Fortress, the forces retreat, and Drace, wounded on her arm, promises to repay Basch in the future.

Spare me your lies! I see the serpent coiled here before me!

Drace talks to Judge Gabranth about how they need to defend Larsa, as the Imperial Senate will discover he will not be a puppet emperor. She does not trust Vayne, thinking him ruthless for killing his two brothers, and suspecting him responsible for Judge Zecht's disappearance after the battle of Nabudis. Bergan and Zargabaath chastise her for voicing her opinion.

When Emperor Gramis is discovered dead, the Judges gather by his body. Drace is the only Judge willing to sentence Vayne for the late Emperor's death, but when she draws her sword against Vayne, Judge Bergan attacks her. Vayne orders Gabranth to execute her for treason, despite Zargabaath begging him to reconsider. Reluctantly, Gabranth obeys. As Drace dies, she quietly asks Gabranth to protect Lord Larsa.

Drace is fought in Zodiac versions' Trial Mode at Stage 100 along with four other Judge Magisters.

, the one on the right shares the appearance of Judge Drace.

In the Japanese version, Drace is voiced by Yoko Soumi.

The localization team did ADR recording to picture without the actors seeing it for many of the Judges. The Judges' actors were largely British stage actors who were recording in a studio in the UK with the directors giving direction over an ISDN line. Because the Judges' faces are usually covered by their helmet, the actors' ability to match lip syncing was not as important for these roles. Unlike most Judges, a local actor was chosen for Drace. The localization team has praised with Julia Fletcher's performance, saying "she knocked it out of the park with an incredible performance, emotional, dramatic, and yet perfectly in sync with the lip flaps".[2] 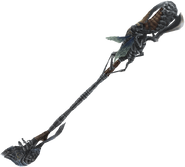 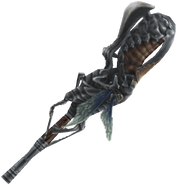 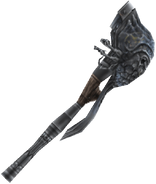 Drace with Zargabaath and Bergan.