Final Fantasy Wiki
Register
Don't have an account?
Sign In
Advertisement
in: Characters in Final Fantasy: The Spirits Within, Cid
English

It is not a fairy tale. It is true.

Dr. Sid is one of the main characters in Final Fantasy: The Spirits Within. He continues the Final Fantasy series tradition of having a character named Cid though the doctor's name is spelled with an nontraditional "S". Dr. Sid's voice was provided by Donald Sutherland.

Dr. Sid is a bald elderly man. He has a white mustache and a white beard and wears a long white coat. He has blue eyes.

The polar opposite of Douglas Hein in a lot of ways, Dr. Sid is an even tempered man of science whose steadfast respect to life and resulting passive opinion of the Phantom invasion is a source of frustration for those, like Hein, who are of a more aggressive outlook. His relationship with his protege, Aki Ross, is that akin to father and daughter.

He is a scientist who has discovered spiritual energy within all living things. Born in Toronto in 1995, Dr. Sid is a biochemistry graduate of the University of Scientific Research. He spent long hours researching the physical properties of living things. After discovering a strange energy during a gravitational field extraction experiment, Dr. Sid began his research upon spirit energy. He along with his wife created the "Gaia Theory", a theory where each life is born of Gaia and each life returns to Gaia upon death. Each life holds a spirit and each spirit brings its experience back to Gaia, enabling it to live and grow. This theory, however, was not widely accepted by fellow scientists, and Dr. Sid and his wife kept it to themselves.

In 2031, when a meteorite from the annual Leonid Meteor shower fell on the Middle East, a series of strange sudden deaths to all living things occurred in the region where the meteorite fell and began to spread across the world. Eight years later, Dr. Sid and his colleagues uncovered evidence of Phantoms who are responsible for the attack. Dr. Sid lost his wife in a Phantom attack over Toronto, and since then dedicated his life to solve the Phantom problem. He discovered bio-etheric energy, as well as a unique wave pattern within the Phantoms. With this discovery, he advocated the use of bio-etheric energy and invented spiritual scanners, ovo-pacs, as well as the weapons used to fight the Phantoms.

His greatest invention, however, was the Barrier Cities which provided protection against Phantoms. With this achievement, he became the director of the Bio-Etheric Center in New York Barrier City, and dedicated himself to research on the wave theory. He has been working on gaining eight spirits of life to make an "anti-wave" against Phantoms, which could save the people and the planet itself. With Aki Ross as his protege, Dr. Sid continued to search for the remaining spirits to complete the wave pattern against the Phantoms.

Sid makes an appearance (along with the rest of the film's virtual cast) in a hidden Easter egg parody of Michael Jackson's "Thriller" music video created for the DVD release of the film.

The parody is set shortly after Douglas Hein inadvertently causes the destruction of the New York Barrier City's barrier control room. As he runs away he runs into Aki, Gray, Ryan, Jane, Neil, Dr. Sid, Major Elliot and three alive Phantoms who proceed to, as a group, perform the dance number to "Thriller" with Aki as the lead.

In an earlier version of the script, Sid and Aki were grandfather and granddaughter. Aki's last name was also different: she was originally Aki Shishido. The relationship and names were changed late enough into production that many of the animators and staff did not even know of the modification of the script until the film was nearly finished.

Artists found that Dr. Sid's facial realism was easiest to create due to his many wrinkles and blemishes. 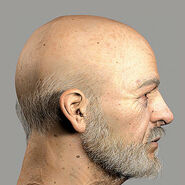 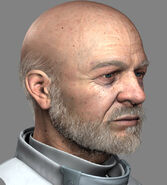 Final Fantasy: The Spirits Within
Deutsch
Community content is available under CC-BY-SA unless otherwise noted.
Advertisement