Cid Pollendina: Oh, shut up and help me remodel the Dr. Mog page!
Please expand this article into a full one. The following tasks need to be completed:This request can be discussed on the associated discussion page. Remove this notice upon completion.

Non-player character
Dr. Mog is the moogle professor and historian under whom Tyro trains in Final Fantasy Record Keeper. He serves as the game's tutor, strategist, and occasionally as items dealer, acting as the player's main guide to the game's features and mechanics.

A mysterious dark force has attacked the Hall of Records after a centuries-long period of relative calm. The attack robs the Records within of their color, corrupting them. The Record Keepers are tasked with protecting and preserving them, but with few Record Keepers remaining, Dr. Mog is forced to send his apprentice, Tyro, into the corrupted Records to restore them, as well as the heroes who lived their stories. A veteran Keeper, Dr. Mog has intel on every major enemy fought and uses his knowledge to aid Tyro and all the legendary heroes of the Final Fantasy series in their task of clearing the corruption from the Hall of Records.

Dr. Mog, ever the curious academic, continues his search for clues as to the source of the corruption, pouring over volumes of faded tomes thought lost in ages past. One of these tomes recorded the existence of ancient ruins known as the Nightmare, within which twelve powerful Records were sealed. He calls on the heroes to liberate the Records in the Nightmare and unlock the powers contained within them.

Dr. Mog does not typically participate in battle, as his main role is to serve as a guide. However, the tutorial battle against Guard Scorpion is intentionally a failure, so that the Bahamut summon spell he carries ends the battle just before Tyro would have been KO'd. This feature was eventually replaced with the selection of Cloud as an initial Roaming Warrior. As of the latest infrastructure updates, Dr. Mog functions as a Roaming Warrior in various special battles; in these cases, he is the only selection available but his abilities are selectable.

Dr. Mog can restore the party to full health at the cost of Gems or Mythril should they fall in battle. He carries a deck of four magic cards, of which one may be drawn by the player and which will grant the party a bonus in battle once they are revived; three of the four cards grant a one-time stat boost, while the last card grants two additional charges to all attached abilities. If the party falls on subsequent attempts at the same battle, they can pick another card, and thereby be granted an additional bonus that will in turn stack with the previous pick(s).

In certain dungeons where normal Roaming Warriors are disallowed, Dr. Mog instead lends his powers as a Roaming Warrior. What Soul Breaks he can cast for the player depends on the dungeon.

When selecting a Record dungeon, or while camping in a Record dungeon in progress*(The camp view feature was not available during the initial game), the player has the option of pressing the Dungeon Info button to view the list of reward items offered. Record dungeons with a boss have a further "BOSS" tab on which Dr. Mog will present "Dr. Mog's Advice", a short synopsis of the enemy to be fought and how best to subdue it. This synopsis also includes the Target Scores needed to earn a complete mastery of the boss area; depending on the number of battle tiers and how the player scored in each tier, mastering the boss tier could make or break mastery of the entire dungeon.

Whenever a new feature is introduced from the game backend, Dr. Mog engages Tyro in dialogue about the addition, after which a summary diagram will follow.

Dr. Mog is the keeper of a mystical fount that can generate new equipment either once per game day or at the cost of 300 Gems or 5 Mythril in a Relic Draw, in effect allowing players to outfit their units or fortify existing equipment. He seems to have an unlimited supply of mystic orbs to support this function. When the player requests a pull, Dr. Mog tosses one or more orbs into the fount, and then it releases the orbs, which change color and pop open to reveal their contents. Rarity is determined by the orbs' colors as follows:

He can also open an item shop during a Collector's Event, whereupon the player can exchange the Magicite Shards accumulated in battle for Mythril, Orbs, equipment, and player characters. 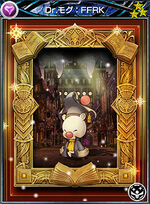 Title screen image for Tanabata 2016 from the Japanese version.

Title screen image for Valentine's Day 2017 from the Japanese version.

Title screen image for Tanabata 2017 from the Japanese version.

Title screen image for Tōrō Nagashi 2017 from the Japanese version.