Final Fantasy Wiki
Register
Don't have an account?
Sign In
Advertisement
in: Characters in Final Fantasy: The Spirits Within, Antagonists

What have I done…

General Douglas Hein is the main antagonist of Final Fantasy: The Spirits Within. A dedicated military general who lost his wife and child to the Phantom threat, General Hein is determined to destroy the Phantoms, using whatever means necessary. He is voiced by James Woods.

Having been born one year before the Leonid Meteor crashed to Earth, Hein grew up during some of the most tumultuous years of the crisis and became focused on finding a way to end the Phantom threat.

Hein is a middle aged man swept back black hair and pale blue eyes. He wears a black turtleneck shirt under a long unfastened leather coat. He wears a wide belt and black leather gloves.

Focused, intelligent and cunning, the loss of his wife and child has driven Hein in his pursuit to destroy the Phantoms. Some would say his focused determination has blinded him from seeing the harm his actions are causing.

Born in San Francisco in 2030, at the age of 17, Hein enrolled in the Houston Military Academy (HMA) within the newly constructed experimental Barrier City in Houston, showing great intelligence and skill at an early age. At HMA, Hein refined his leadership skills, gaining training in advanced artillery and strategic tactics as well as military science. It is here where he met his wife, a social worker who also shared his dedication to find a solution to the Phantom problem. Upon graduation from HMA, General Hein settled in San Francisco Barrier City with his wife and soon they had a young daughter. He lost both his daughter and wife when the San Francisco barrier failed.

The failure of the barrier only surged Hein's quest to find a solution to the Phantoms. After the 4th Phantom Cleansing Mission, he was promoted to the position of General and became a guiding force behind the development and construction of the Zeus Cannon. Intent to avenge his family's death and to release himself and the rest of the world from barrier city 'cages' they live in, General Hein is determined to use the cannon to wipe out the Phantoms at their source; the Leonid Meteor. However, before he can demonstrate to the Council the cannon's firepower, Dr. Sid and his student, Aki Ross, manage to convince the Council on their efforts to contain the Phantoms, and possibly eliminate them, in a more peaceful manner.

To finally convince the Council his ways are better, Hein goes to the barrier control center to deactivate a small part of the New York Barrier City. He plans to show the Council the Phantom threat must be eliminated quickly, but, unaware the Phantoms can travel through the energy pipes, the Phantoms' invasion goes out of control, and New York has to be evacuated. Feeling guilty of his actions, Hein contemplates suicide, but then changes his mind; opting to continue his fixation to use the Zeus Cannon to eliminate the Phantoms. It is at this moment he receives permission from the Council to do so.

Hein begins firing the cannon upon the Leonid Meteor, the source of the Phantoms that crashed upon Earth years ago. The first attempt is unsuccessful, and instead unleashes the alien Proto-Phantom, but due to his determination to destroy the Phantoms, Hein continues firing; piercing through the planet's crust and into the Earth's own Gaia.

Hein ignores both Aki's request to stop firing and his own technicians' warnings that the cannon is overheating. Moving to manually fire the cannon after removing the cannon's safety switches, Hein's actions, blinded by his focused determination to rid the Earth of the Phantoms, result in the gun overloading and exploding; killing everyone onboard, including himself.

Hein appears along with the rest of the film's virtual cast in a hidden Easter egg parody of Michael Jackson's "Thriller" music video created for the film's DVD release.

The parody is set shortly after Douglas Hein inadvertently causes the destruction of the New York Barrier City's barrier control room. As he flees he runs into Aki, Gray, Ryan, Jane, Neil, Dr. Sid, Major Elliot and three alive Phantoms who proceed to, as a group, perform the dance number to "Thriller" with Aki as the lead.

Compositing Supervisor James Rodgers chose Hein's Suicide Attempt scene as his favorite scene in the movie due to the deft camera movement and the many compositing tricks he and his team employed.

The interior of General Hein's office was designed using a lot of natural wood, making it the warmest interior in the movie.

The message on the back of Hein's photo of his wife and child reads: "Lost Without You". 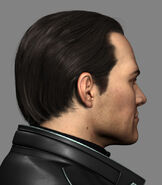 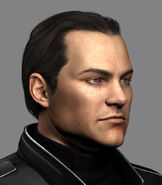 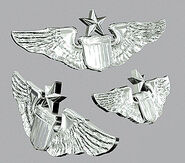 Hein's name is a reference to Robert A. Heinlein, author of Starship Troopers. It is also shared by Hein from Final Fantasy III.